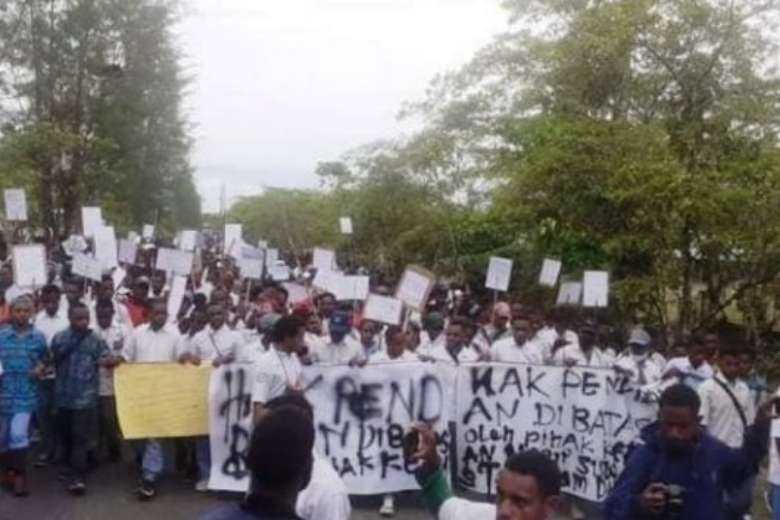 Papuan students in Yahukimo hold a protest against their schools being used by police in Yahukimo district on Jan. 20. (Photo: Facebook’s Warpo Sampari Wetipo)

At least 1,000 students in Indonesia’s Papua province held a protest at the local authority office in Yahukimo district demanding members of the police force move out of their school premises.

The local government has allowed police to camp inside three schools — the senior high school in Ninia and Angguruk villages and a vocational high school in Dekai village — following clashes among tribes and between security officers and the Papua Independence Organization (OPM) last October.

The presence of the mobile brigade corps has hampered the studies of at least 600 students for more than three months, say the activists.

“We asked the education authority of the district to look for a solution and move out the police,” Denias Helembo, coordinator of the protest action, said on Jan. 20. “If the local government doesn’t pay attention, we will hold more protests together with parents.”

Esau Miran, deputy regent of Yahukimo, said he will ask Yahukimo police chief Deni Herdiana to move the mobile brigades from the schools.

Several rights institutions and activists including the Legal Aid Foundation in Papua have petitioned Vice President Ma’ruf Amin seeking his intervention in the matter.

“We called for the vice president as chairman of the steering committee of the Integrated Coordination Team for the Acceleration of Welfare Development in Papua and West Papua provinces to order members of the mobile brigade corps to leave the schools,” said Emmanuel Gobay, director of the Legal Aid Foundation.

He said that national police chief General Listyo Sigit Prabowo had even issued orders to the Papua police to leave the schools.

He urged the National Commission of Human Rights in Jakarta and its representative in Papua to ensure the right to education of the students.

The Yahukimo police chief assured the protesters that he will move the mobile brigade corps from the schools immediately.