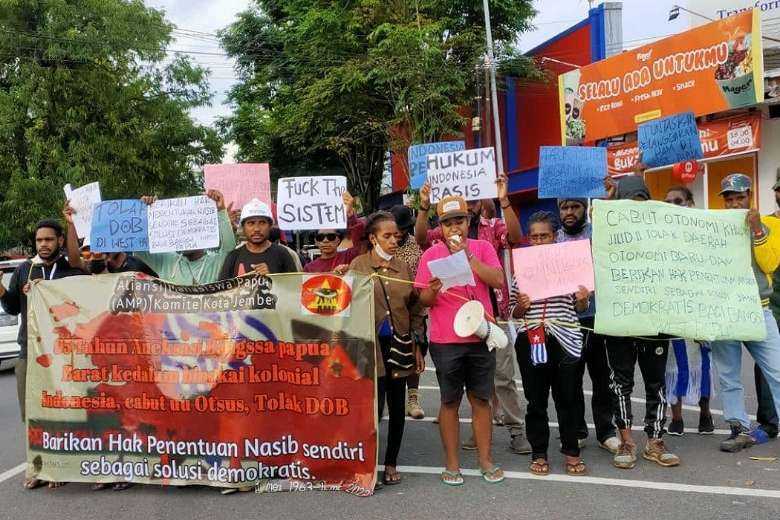 Papuan students from the Papuan Student Alliance rally in Jember, East Java, on May 2 to mark the 59th anniversary of Indonesia's annexation of Papua. (Photo supplied)

Papuan students have called on the Indonesian government to arrest military commanders involved in human rights violations in the country’s restive easternmost region.

Hundreds of students from the Papuan Student Alliance issued the demand during a rally in Jember, a city in East Java province, on May 2 to mark the 59th anniversary of Indonesia’s annexation of West Papua.

West Papua was annexed by Indonesia on May 1, 1963. Every year Papuans mark the day with protests.

“Arrest, judge and sentence generals to prison who are guilty of committing human rights violations in West Papua,” Etanias Wandikbo, coordinator of the demonstration, said in a statement.

According to the National Commission of Human Rights, at least 1,182 acts of violence were committed by the military, police and separatist groups between 2020 and 2021. Many of the victims were civilians.

“We urge the Indonesian government to stop military operations in Papua," Wandikbo said before calling for the United Nations to monitor and help end abuses.

Emanuel Gobay, a human rights lawyer and director of the Legal Aid Foundation in Papua, said the students were justified in calling for justice against military commanders.

“Generals involved in gross human rights violation cases should be processed legally. Justice must be seen to be done,” he told UCA News.