Several Papuan students are seen here with the banned Morning Star flag while attending a Mass at the Good Shepherd Parish Church in Abepura on Dec. 1. (Photo supplied)

Four Papuan students were arrested for displaying the banned Morning Star flag while attending Sunday Mass in a Catholic church on Dec. 1.

They were among dozens of people reportedly arrested for trying to celebrate what Papuans consider their independence day.

The students were arrested at the Good Shepherd Parish Church in Abepura, Jayapura Diocese, shortly after the Mass ended, according to parish priest Father James Kosay.

He said the students entered the church after the Mass had started, wearing traditional Papuan clothes and carrying flags. They also painted the flag on their faces.

"Undercover police were already sat at the back of the church,” the priest told ucanews. “After the closing song, they grabbed the young men and took them to the police station.”

The Papua Human Rights Defender Coalition later said in a statement that the men were interrogated for more than 14 hours before being released on Dec. 2

Father Kosay condemned the arrests, saying Indonesian law prohibits someone’s arrest in a place of worship. He said police violated the sanctity of the church and that if it was absolutely necessary to arrest them, they should have done so outside the church building.

As far as the church was concerned, it "does not discriminate against people based on their political views” including those who aspire to have self-determination, he said.

He said he saw the students' action was symbolic, indicating that when public spaces could no longer be used to voice their aspirations of hope, they would turn to God as the source of hope.

According to Emanuel Gobay from the Papua Human Rights Defender Coalition, the young men had told him they held flags during the Mass “to ask for God’s help for all Papuans." 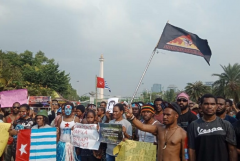 He said there was no legal basis for the arrests. "People cannot be arrested for just carrying flags while expressing their political views unless they do so in a violent way," he told ucanews.

However, Papua police chief Paulus Waterpauw said the four were arrested for "wearing unauthorized symbols.” Police wanted to know the motives behind their actions, he said.

Elsewhere, at least 34 other people were arrested for trying to mark Dec. 1, the Antara news agency said, citing police figures.

The arrests came amid tightened security involving at least 1,300 troops deployed to the restive region.

Dec. 1 marked the 58th anniversary of when the Papuan Morning Star flag was first officially raised when Papuans declared their independence when their Dutch colonial rulers left.

The flag was later banned after Indonesia took over Papua in 1969 following a controversial referendum.

The region has been marred by violence for years. Pro-independence efforts continue, both through armed groups and political movements.