Papua priest puts life on the line to fight injustice 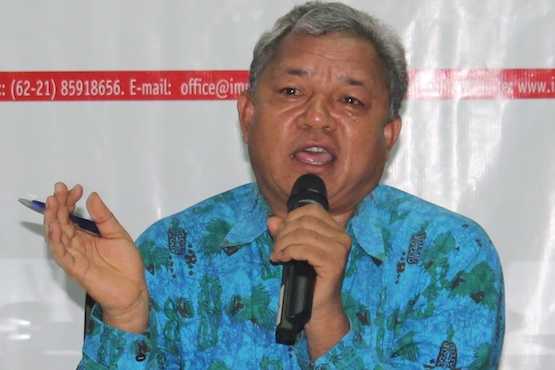 Father John Djonga, a 59-year-old priest of Jayapura Diocese in Papua, is known for his bravery in speaking out on behalf of the underprivileged. (Photo by Ryan Dagur/ucanews.com)

Death threats, difficult terrain and police interrogations for suspected treason last year have not dented the spirit of Father John Djonga to render service in Indonesia's restive province of Papua.

The 59-year-priest of Jayapura Diocese has more than 30 years of service in the region's remote areas, which are not only difficult to reach but also greatly impoverished despite the area being rich in natural resources.

Djonga arrived as a catechist in 1988 from his home on Flores, east of Komodo Island. Inspired by a shortage of priests in the area, he attended a seminary in Jayapura Diocese in 1990 and was ordained a priest in 2001.

Performing religious duty in Papua is a risky business. The Christian-majority region has emerged as a conflict hot spot since it was annexed by Indonesia over 50 years ago.

A pro-independence group has stepped up its insurgent attacks in recent years, leaving a trail of casualties in its wake despite police reporting numerous arrests.

One report by the International Coalition for Papua found that arrests had quadrupled from 1,083 in 2015 to 5,361 in 2016, mostly during peaceful protests in support of the group.

Recent reports suggest the government's claims that human rights are improving in Papua are not accurate.

Djonga, who now serves as a parish priest at the Christ the King Church in Wamena, said he often runs into people who claim they have been persecuted by local security forces. Some report being tortured — and the priest is not afraid to demand soldiers be disciplined when they step out of line.

"I chose to be a priest not only for [believers] but also for pro-independence groups, most of whom hide in the forests," he told ucanews.com.

Few priests choose to fraternize with the insurgents, he said.

"They are also my flock and are in need of service regardless of their political affiliations," he said. Papuan boys watch a military Mi17 helicopter at Erwer airport in Agats, Asmat district, in West Papua on Jan. 27. Worried parents braved long queues and scorching heat in the remote Papuan jungle to get their sick babies treated, as the impoverished region grapples with a deadly measles-and-malnutrition outbreak. (Photo by Bay Ismoyo/AFP)

He said he hopes to help scale down the attacks by playing something of an intermediary role.

"Though military personnel or some pro-independence group are Muslims, when I talk about humanity there are no barriers between us," he said.

However, he admitted he receives death threats and other forms of intimidation on a regular, sometimes daily basis.

After complaining to the Papua governor in 2007 about how the military was using tactics to intimidate local people, he said he received a terrifying phone call from an unidentified military man.

"[He] told me I would be buried alive 700 meters deep," Father Djonga said.

"But I'm not scared as I know this is the risk attached to my ministry."

In 2016 he was questioned by the police for leading a prayer service attended by members of an alleged Papuan separatist group. He was later released without charge.

"I told the police that whether they are pro-Indonesian or if they want to be independent, I must serve them. That is my duty," he said.

Diet-related health risks and low levels of education are among other issues that plague the region, Father Djonga said.

Over 72 children in Asmat district, a remote area in the country's easternmost province, have died in recent months due to malnutrition while about 650 have contracted measles, said local district chief Elisa Kambu.

Medical and military teams were sent to the district in response and a state of emergency was declared on Jan. 15, according to media reports. Despite the arrival of a military medical team in Asmat district on Jan. 27 to help with the recent measles outbreak, Father Djonga said the trials and tribulations of poor people in the region are often neglected by the government. (Photo by Bay Ismoyo/AFP)

For Father Djonga, such stories of tragic deaths are nothing new.

Last year he was involved in an investigation with a group of volunteers to document the mass deaths of nearly 100 people in Yahukimo district. The deaths occurred over a period of months.

"Tragic deaths like this are an oft-repeated story here and yet we are not seeing any truly monumental effort to stop it," he said.

Infuriated by what he sees as the state's lackluster efforts, he went on a national TV station last month and criticized the government.

His comments on MetroTV sparked a fierce debate with a government minister who appeared on the same show.

"I told him my remarks are based on real experience. There are clinics in Papua but no nurses and medicines. How can the government promise it will improve the situation if it doesn't even consider basic problems like this?" he said.

He said children are being robbed of a decent standard of education by similar shortfalls that result in shortages of staff and resources.

"School buildings exist but there are no teachers, let alone books," he said.

"I have worked here for 30 years but there has been no significant change," he lamented.

"As a pastor I serve my flock with the sacraments. But that is a standard task. I also feel obliged to be directly involved with the everyday issues and problems they face," he said.

He urged greater church involvement in Papua given the huge challenges the people there now face.

"This is a field that needs liberation missions," he said. He believes Jesus would have encouraged those of faith, and who are able, to get involved and help out in the troubled province, now deeply mired in social and political problems.

In recognition of his struggle, Father Djonga received the Yap Thiam Hien Award in 2009. He shared Indonesia's most prestigious human rights award that year with a Chinese lawyer who was a renowned activist.

His best friend, Rev. Benny Giay of the Synod of Christian Churches in Papua, said one of Father Djonga's strengths is his ability to mingle with people across the whole social spectrum.

"He is an ideal shepherd," Rev. Giay said. "He is a pastor who wants to drown in the swamps of people's suffering."

"He can also instruct people. He tells people: 'Let's get out of this situation,'" he said.

Theo Hesegem, chief of the Advocacy Network for Law Enforcement and Human Rights, said Father Djonga is not afraid to put his life at risk as he fights to improve people's lives.

"We work together a lot and his commitment is clear," he said.

"He is a great example of a pastor who wants to stand on the front line to fight for justice."