A priest leads a prayer service in Papua province, where there are growing calls for the Vatican to appoint indigenous priests as bishops amid a deepening distrust of prelates from other parts of Indonesia. (Photo: Flori G.)

The people of Papua have become disenchanted over a lack of action among Catholic leaders amid the hardships they are facing.

The silence of the shepherds amid a climate of insurgency-led violence and perceived state oppression is interpreted as them showing no concern, prompting locals to seek help from the universal Church.

Papuans, individually or in groups, have renewed calls for a change of church leadership in their homeland. They have appealed to the Vatican to appoint bishops from their own kind, who smell like sheep, eat with them and will protect them from enemies.

The demand for native Papuan bishops has grown stronger in recent years as tensions in Indonesia’s easternmost region escalate and many civilians including Christians have been killed.

The opportunity to have them is here as Catholics in Timika and Jayapura dioceses are waiting for new bishops.

Earlier this year, members of One Voice for Papua Lay Catholics said they had no confidence in the bishops working in Papua — Archbishop Petrus Canisius Mandagi of Merauke, Bishop Leo Laba Ladjar of Jayapura, Bishop Aloysius Murwito of Agats-Asmat and Bishop Hilarion Datus Lega of Manokwari-Sorong.

They see the prelates as having shown a lack of interest in supporting them in their struggles. They called on the Vatican to replace them with native Papuan priests and accused them of turning a blind eye to a humanitarian crisis in the region.

The group also accused the Indonesian Bishops’ Conference of showing no concern when two catechists were shot in Papua’s Intan Jaya Regency last year but speaking out when a family were attacked by terrorists elsewhere in Indonesia, in Central Sulawesi.

Group members said the criticism and demand for native bishops did not mean they were against the Catholic Church. It was simply because non-native bishops don’t understand, reflected in their silence on human rights abuses in the region.

Some Catholics, however, defended the bishops, saying that as leaders the prelates have different ways of showing concern about rights violations and that collaboration with authorities or rights groups in investigating crimes is part of their support. 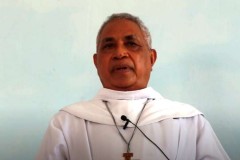 But for many Papuans, a shepherd can do more than that and the late Bishop John Philip Saklil, the first native Papuan bishop, had shown this.

From his inauguration as bishop in 2003 until his death in August 2019, the prelate was loved by his people as he dared to speak against violence and land encroachment in his diocese.

Since his death, Catholics have been longing for someone like him to lead Timika Diocese and others in the troubled region.

In a letter published by Detik Papua in August, Yakobus Dumupa, the head of Dogiyai district in Timika Diocese, explained the reason why Catholics have appealed to Pope Francis for a native bishop.

He pointed out that appointing native bishops would eliminate suspicion and distrust among Papuans towards non-Papuan nuns, bishops and church administrators. Some see their silence as supporting the Indonesian government in harming and victimizing indigenous Papuans.

In the past, he says, a lack of native Papuan priests was the reason for not appointing indigenous prelates. But now that many Papuan priests have leadership capabilities. Pope Francis should appoint some of them as bishops to keep the Catholic Church relevant to Papuans, he adds.

The pope could perhaps start with the successor to late Bishop Saklil and by replacing Bishop Ladjar of Jayapura, who should have retired three years ago but remains in office pending a replacement decision by Pope Francis.

Will the pope do as they ask? If he does, will it change the situation in Papua?

There is no fixed answer to that question, but the Catholic Church has rules of engagement when it comes to the appointment of bishops.

Church law expert Father Rikardus Jehaut, a member of the Canon Law Society of Australia and New Zealand, says the Vatican considers a lot of factors before choosing a new bishop.

The process takes years to complete as it involves broad consultations with many parties, as mandated by Article 378 of the Canon Law.

The article, he says, explicitly underlines the qualifications that prospective candidates must possess. They include having a good reputation, impeccable morality and wisdom, orthodoxy of faith, loyalty to the church magisterium, a doctorate or licentiate in dogmatic, moral theology or canon law, and possessing good pastoral and management skills.

But even if a priest has all these qualifications, there are other considerations, and it’s totally at the pope’s discretion.

Catholics have been told to accept the pope’s decisions with full obedience because before making one he has asked for guidance from the Holy Spirit. That’s one of the characteristics and strengths of the Catholic faith.

The demand by Papuan Catholics for native bishops is timely as the universal Church is preparing for the Synod of Bishops in 2023. The pope kicked off the diocesan consultation process on Oct. 17 and has extended the deadline until August next year to allow more Catholics, including those in conflict zones, to participate.

Papuan Catholics must take this opportunity to make their voice for change heard through the Vatican's corridors.