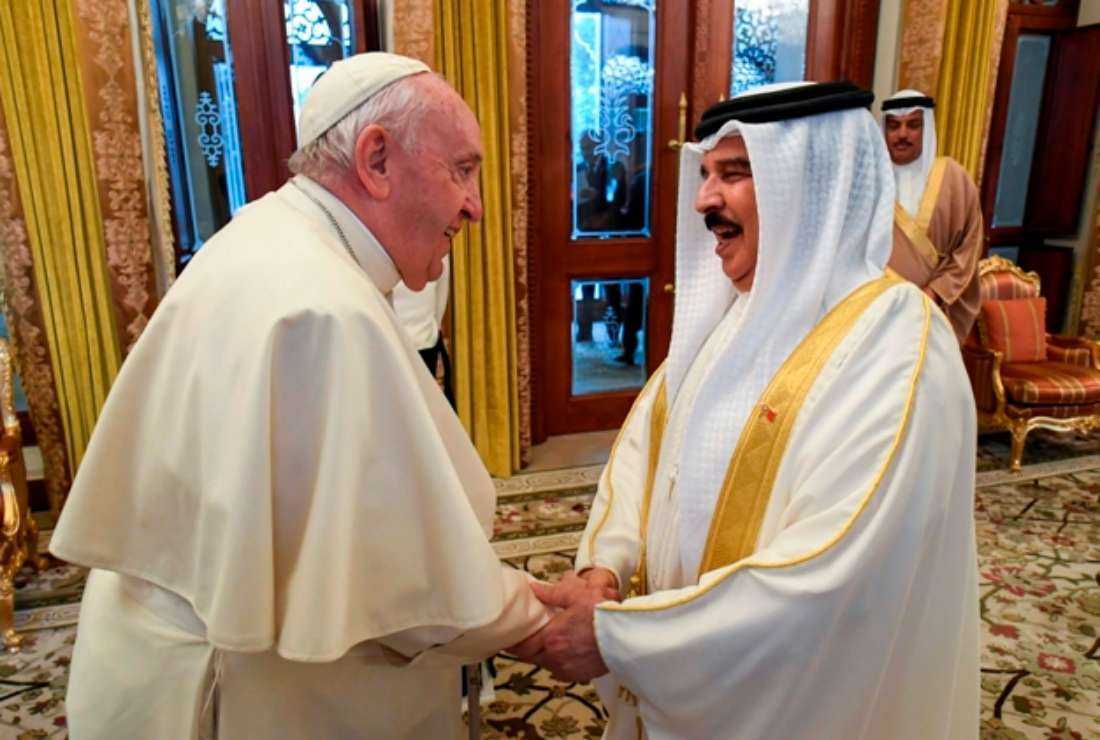 Christian-Muslim relations are far from cordial in Asia, as Muslims generally see Christianity as a Western religion, which is opposed to its religious and political ideologies.

The Western world’s perception of Muslims across the globe supporting a political global Islamic caliphate, spearheaded by the Islamic State (IS), makes relations even worse.

The imagined caliphate stretches beyond the Middle East to include Andalusia, Turkey, the Balkans, Iran, South Asia, Central Asia, and Xinjiang in China. The absurdity of such a vast land under one central Islamic authority, with Arabs as natural rulers of the Muslim world, is serious for sections of the world's population, increasing tension and violence.

Amid this anarchy of minds, Pope Francis is focused on using religions, their ethos and philosophies to promote peace.

The three-day papal visit to Bahrain concluded on Oct 3, which was his second visit to the Arab world. More than 200 religious leaders from different parts of the world took part in the “Bahrain Forum for Dialogue: East and West for Human Coexistence” along with Pope Francis.

The pope is moving forward with “a certain logic” to open new paths to the “different realities of the Muslim world," said Bishop Paul Hinder, the apostolic vicar for Northern Arabia, which covers Bahrain along with South Arabia, Qatar and Kuwait.

"An opportunity to [have a] dialogue as brothers, animated by the common desire for peace, peace that our world is thirsty for"

"Like your patron Saint Francis of Assisi,” the Capuchin Swiss prelate said, “you are not afraid to build bridges with the Muslim world and to show your fraternal closeness to all people of goodwill.”

Following the Bahrain Dialogue, Pope Francis met with the Muslim Council of Elders, founded in 2014 in the UAE to promote peace and address sources of conflict within Muslim communities.

He also had a private meeting with the Grand Imam of Al-Azhar in Egypt, Ahmed Al-Tayeb. Both of them inked the Document on Human Fraternity in Abu Dhabi in 2019. Since then, the document has been the main guiding principle for inter-religious talks.

In September, Pope Francis took the message of peace to Muslim-majority Central Asia with a three-day trip to Kazakhstan to take part in the 7th Congress of Leaders of World and Traditional Religions in the capital Nur-Sultan.

The pope said the visit to Kazakhstan was "an opportunity to [have a] dialogue as brothers, animated by the common desire for peace, peace that our world is thirsty for."

He was expected to visit Indonesia, the world’s largest Muslim nation, late in 2020, but this was canceled because of the pandemic.

Pope Francis has an impressive track record of engagement with the Muslim world. When he completed six years as Bishop of Rome in 2019, the 85-year-old pope had already visited seven Muslim nations.

"We do not see any worthwhile engagement with Muslims in Asia, particularly in South Asia"

The papal interest in building bridges with Muslims is hardly reflected in the Church in Asia, which houses more than half of the world's Muslims.

Nations such as India, Pakistan, Indonesia and Bangladesh alone account for 40 percent (800 million) of the world’s two billion Muslims. If papal efforts have to bear the fruits of peace and cooperation between Christians and Muslims, the Church in Asia needs to pay much more attention to its actions.

The Federation of Asian Bishops’ Conferences has been holding "dialogue with religions” vital to its mission in Asia. Along with it, dialogue with the poor and dialogue with cultures was presented as indispensable for valid Christian existence in Asia.

However, decades after these declarations, we do not see any worthwhile engagement with Muslims in Asia, particularly in South Asia, where Muslims dominate in a few countries.

Dialogue with Islam looks neglected as churches in Asia focus on dialogue with Hinduism and Buddhism in their efforts to engage with Asian religions. It is time the Asian Church considered Islam an Asian religion and engaged with it in creative ways to help improve the lives of millions. Peace comes with progress.

The triple dialogue — with religions, cultures and the poor — will become a simultaneous action when Christians start collaborative actions with Muslims, Hindus and Buddhists to lift the poor out of their miseries. Millions in Asia are poor, despite the fact that they follow a religion, and its culture. Engaging with the poor is, in fact, engaging with cultures and religions.

One of the seeming difficulties in engaging Muslims is its link with politics. The Church, particularly the hierarchy in Asia, fears engaging with Islam will invariably link it to political Islam, which they want to avoid.

Pope Francis becomes a beacon here to swim through the sea of political complexities to reach the shore of friendship and collaboration.

The other issue could be the prospect of being accused of engaging in charity to convert poor Muslims in Asia, particularly South Asia, which has the dubious distinction of housing the world’s poorest Muslim communities. It is time the Church in Asia walked its talk and collaborated with Muslims to help their poor without converting any. It will also disprove Hindu hardliners’ claim that Christian charity is a facade to convert the poor.

In any case, the Asian Church hierarchy delaying its engagement with Muslims would render papal visits to Muslim nations futile.

ADEM FROM JUSTICE FOR ALL
As a Muslim, I welcome this engagement. It's important to remember, however, that despite our imams and our scholars, that in essence we (at least the Sunni majority) are a decentralized religious community, unlike the Catholic hierarchy. This requires an effort to reach out to diverse Muslims (and we are indeed very diverse) without necessarily allowing one leadership structure to vet and determine participants. The Muslim scholars who work on pluralism issues can help guide this process, as long as care is taken to include women and youth. The ideology of political Islam can lead to repression (just as Hindutva nationalism has lead to repression in India, or Buddhist nationalism has led to persecution in Myanmar) but not every Muslim influenced by these conservative intellectual movements is problematical, much less militant. I would point out that you have used a photo of Gulf Arab leaders to illustrate an article focused on Asian Muslims (Asian and African Muslims are far, far more numerous than Arab Muslims)
Reply