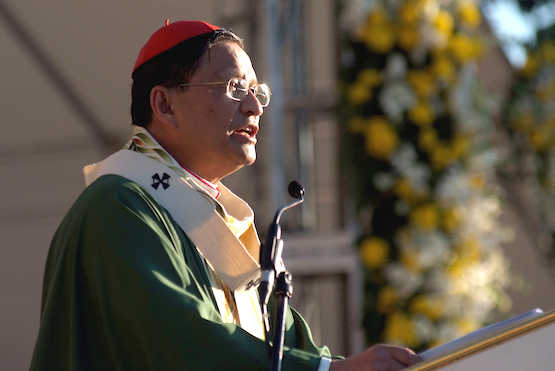 Cardinal Charles Maung Bo of Yangon, papal legate to the 51st International Eucharistic Congress, urges Christians to work for justice during the opening Mass for the gathering in Cebu on Jan. 24. (Photo by Angie de Silva)

Cardinal Charles Maung Bo of Yangon, Pope Francis' personal representative to the International Eucharistic Congress in the Philippines, has called on Christians to commit to justice and to devote time to help the poor.

"[The] Eucharist calls for a third world war," the cardinal told thousands of people gathered for the opening Mass of the international gathering in Cebu City in the central Philippines on Jan. 24.

Bo called for a "third world war against poverty … against the cruelty of dogs getting sumptuous organic food while more children [have no food on the table] … against a world that produces more weapons while more than half a billion don't have enough food."

He cited data from the United Nations Children's Fund that says some 20,000 people die of starvation and malnutrition everyday.

Cardinal Bo said described malnutrition and starvation as "mass genocide," adding that in an unequal and uncaring world, "the Eucharist calls us to justice" because the Eucharist and poverty are inseparable.

"The Eucharist is a beacon of human dignity for the poor," he said, adding "no other religion elevates the poor to this level," he said.

Cardinal Bo emphasized the need to proclaim the "Gospel of life" in the streets while warning against the dangers posed by abortion, death penalty, and euthanasia.

"Devotion is good but not enough," he said. "Christ is calling us to be disciples to carry his cross."

He said real fasting "is breaking the chains of injustice" by removing oppression, sharing food with the hungry, and sheltering the homeless.

Cardinal Bo arrived in Cebu earlier in the day with Archbishop Giuseppe Pinto, papal nuncio to the Philippines.

"I am very happy to be here. I'm the pope's legate. I'm not worthy but I came here just to give service and to convey the pope's message," the prelate said upon arrival at Cebu's airport.

In a press briefing later in the day, Bishop Mylo Hubert Vergara of Pasig said Cardinal Bo is a church leader who is "in touch with the periphery."

"We will feel the presence of the pope through the papal legate," said Bishop Vergara, head of the communications for the eucharistic congress.

Pope Francis named Bo a cardinal during last year's consistory and appointed him papal legate to the congress October.