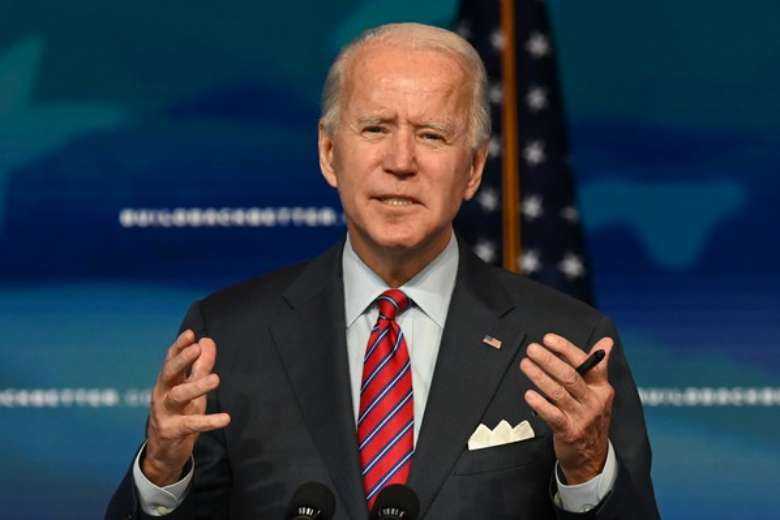 US President-elect Joe Biden speaks on the latest unemployment figures at The Queen in Wilmington, Delaware on December 4, 2020. (Photo: Jim WATSON / AFP)

President-elect Joe Biden's Catholic faith came less into play than the values he and Pope Francis share at a Georgetown University-convened online panel examining how U.S.-Vatican relations could be shaped under the Biden administration.

"We have a pope in a hurry. I think we have a president in a hurry," said Shaun Casey, a professor in Georgetown's School of Foreign Service and director of Georgetown's Berkley Center for Religion, Peace and World Affairs, which sponsored the Dec. 4 forum.

Casey argued that making a "political" appointment to the Vatican ambassadorship should be subordinate to appointing a career diplomat to the post. "It will insulate them (the Biden administration) from the culture wars in the American Catholic Church if you pick a career diplomat," Casey said at the forum, "Rethinking United States and Vatican Diplomacy."

He went so far as to suggest that a non-Catholic could be chosen for the job. "I think the Vatican will accept a non-Catholic," Casey said. "They're not so concerned about the theological status of the incumbent in the position" as they are the credentials brought to the table, he added.

Casey predicted, though, that "the Catholic president from Scranton (Pennsylvania) will not be able to resist making a political appointment."

Biden needs to be cognizant of ' the role Catholics play in American politics," said Cathleen Kaveny, a professor of theology and law at Boston College.

Still, "our ambassadorships to the Holy See should not be seen merely as reward for red Catholics or blue Catholics. In this moment of American relationships with the Holy See, we need to take advantage of the Holy See's network of diplomatic relations," Kaveny said, "and partner with the Holy See in creating a more just and stable world."

While it is "tempting" for Americans -- Catholics included -- "seeing the pope as a source of doctrinally based teaching," Kaveny noted, "that is true, but it is not all that is true." The Vatican, she added, is not just "Catechism Central," but has diplomatic relations with 183 different nations, and the United States could use the Vatican as a resource for restoring frayed international relationships.

"The world is ready for the United States to come back into international affairs and international collaboration," said Jesuit Father Drew Christiansen, a Georgetown School of Foreign Service professor and Berkley Center senior fellow.

But "the world we return to is not the world we left" when Donald Trump took office in 2017, he advised, taking note of China's "Belt and Road" development in western Asia and other economic ties across the globe.

Casey said the Vatican's sometimes-maligned "secret agreement" with China enacted in 2018 on the appointment of bishops and renewed in 2020 is an example of a nation that can reach agreement with China on a treaty. The Vatican describes it as a pastoral, not political, agreement.

Although Pope Francis signed the document, negotiations had begun under St. John Paul II and continued through the papacy of Pope Benedict XVI," so it's been a 20-year process," said Josh McElwee, the Rome-based international news editor for the National Catholic Reporter.

"The Vatican does not see itself as working only with the bishops of the country. A good example of that is the deal the Vatican has made with Beijing," he said.

President Barack Obama's last Vatican ambassador was Ken Hackett, the former head of Catholic Relief Services. Hackett was "seen by the Secretariat of State here as someone they cold collaborate with," McElwee said. He was succeeded by Calista Gingrich, who "came to the job with very little formal experience" and no formal role in the church like Hackett had, McElwee added.

Gingrich "managed to engage Cardinal (Pietro) Parolin (the Vatican's secretary of state) in dialogues where they could be had," such as global religious freedom and the rise of anti-Semitism in Europe, he said, but the bigger problem was "the Trump administration, not anything to do with Gingrich's qualifications." These "tangential issues," he added, "didn't' get to the heart of Pope Francis' policy, or Trump's 'America First.'"

The range of issues where a Biden-led United States and the Vatican can work collaboratively include climate change; Pope Francis' first encyclical, "Laudato Si'," dealt with the environment, and Biden has said he intends to have the United States rejoin the Paris climate accord once he is sworn in as president.

"Climate change, I would say, is an overlapping issue," Kaveny said.

Father Christiansen said immigration and refugees is a central concern to both the U.S. and Mexican bishops, while "the (nuclear) nonproliferation treaty review and what follows from that will be very important on both sides."

McElwee said the U.S. bishops will focus on abortion and executions, while the Vatican will focus on China and international relations in its dealings with the United States.

"Economic inequality is going to be an issue," Casey said, in addition to global population and "the implosion of democracy," the latter of which Pope Francis alluded to in his new encyclical "Fratelli Tutti, on Fraternity and Social Friendship."