Covid-19 and conflicts continue to grip Asian nations alongside endeavors for hope, solidarity and justice.

A 67-year-old Catholic bishop, John Hsane Hgyi of Pathein, died from Covid-19 in Myanmar as observers fear the country is on the brink of a humanitarian catastrophe due to atrocious mismanagement of the deadly pandemic by the military regime. Church officials said the late bishop had stayed in his room in self-isolation after feeling unwell since July 16. He also suffered from diabetes and had a low level of oxygen the night before he died.

He was one of the most active internet users among church leaders in Myanmar and used the internet to provide spiritual nourishment through daily Masses, prayers, sermons and novenas. He was among 247 people in Myanmar who died on Thursday from the coronavirus.

Myanmar is facing a worsening third wave amid a lack of oxygen and overwhelmed hospitals following mismanagement by the military junta that grabbed power in February. Yet the junta has continued a crackdown on health workers including doctors and nurses for protesting against the coup and joining a mass civil disobedience movement.

Myanmar has recorded more than 247,000 cases and 5,800 deaths from Covid-19. Catholic leaders have appealed for an end to violence and more help for the suffering. Catholics have joined the battle to help the needy as Indonesia became the epicenter of the Covid-19 crisis in Asia. The Sisters of Charity of St. Charles Borromeo in Selman district in the Yogyakarta Special Region have offered their formation house as a free isolation center for Covid patients.

The center can accommodate 164 people in 82 self-contained rooms with health monitoring equipments. Through a program called “Love for each other food stall,” Catholic parishioners of St. John the Baptist Church in Bandung Diocese of West Java province are working with street food stall owners to provide free meals for local people. 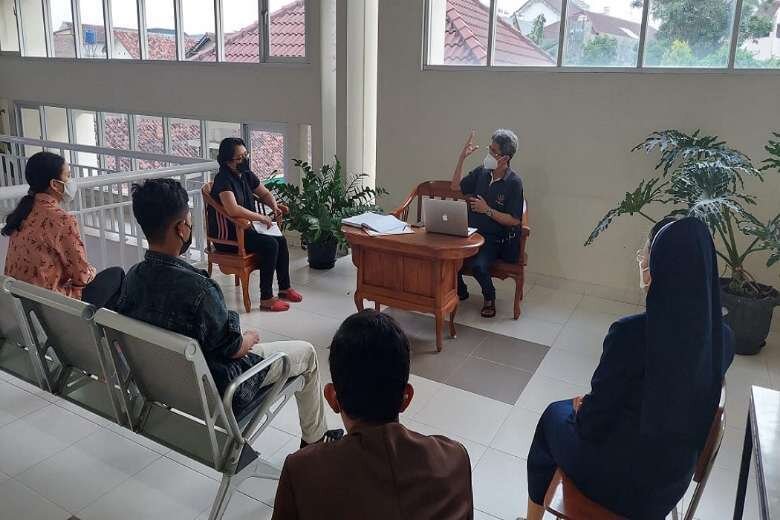 Volunteers who will work at the Syantikara Shelter owned by the Sisters of Charity of St. Charles Borromeo in Yogyakarta are briefed by a doctor. (Photo supplied)

Volunteers from the parish have distributed food items to at least 1,000 people with the help of street vendors. The parish has also donated 40 coffins to local hospitals because of a shortage due to a spike in the number of deaths.

The pandemic has infected over 2.98 million people and caused more than 77,000 deaths in Indonesia, which now has the highest number of daily cases in the world. More than 500 doctors have also succumbed to Covid-19.

A veteran radio commentator has become the latest victim of a series of murders of media persons in the Philippines in recent years. Reynante “Rey” Cortes of DYRB-AM radio station was shot dead in Cebu City on Thursday by unidentified gunmen riding a motorbike.

The commentator was rushed to a nearby hospital but was declared dead on arrival. The killing triggered strong condemnation and calls for justice from journalist groups and church officials. 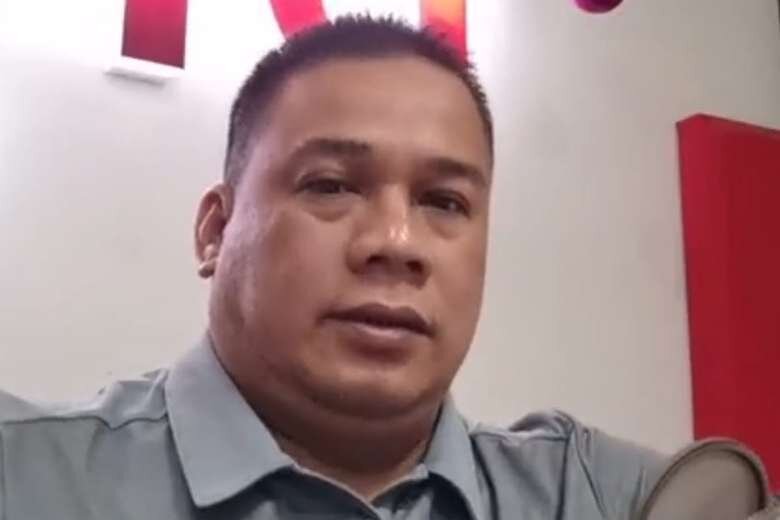 An image of Reynante Cortes from his Facebook page.

According to the country’s journalists’ union, at least 223 attacks and threats have been made against media members during the tenure of President Rodrigo Duterte. The group also noted that more than 170 journalists have been killed in the country since 1986.

The state of press freedom remains extremely perilous in the Catholic-majority country, which ranked 136th out of 180 countries in the World Press Freedom Index 2021.

Indian Jesuits face an uncertain future as conflicts between the Taliban and Afghan forces escalate ahead of the withdrawal of US soldiers after 20 years of war in Afghanistan. With the Taliban making sweeping gains in claiming territory, fears of human rights and cultural abuses loom large.

Father Jerome Sequeira, country head of the Jesuit mission in Afghanistan, said Jesuits will continue to accompany and give hope to the suffering Afghan people in whatever way is possible. The Jesuits came to Afghanistan in 2004 with an aim to rebuild the war-ravaged nation through education. Photographers pay homage to Indian journalist Danish Siddiqui in front of his portrait at Swayambhunath Stupa in Kathmandu on July 20 after the Pulitzer Prize-winning photographer with Reuters news agency was killed covering fighting between Afghan security forces and the Taliban near a border crossing with Pakistan. (Photo: AFP)

The Jesuit Refugee Service stepped in to educate the youth, focusing on internally displaced persons, returnees from neighboring countries and vulnerable sections of society. In collaboration with local staff, the Jesuits trained more than 300 young teachers who were educating more than 25,000 young boys and girls in four provinces.

Young girls were major beneficiaries of the Jesuit mission as women and girls were the main victims of the Taliban’s misogynist rule before it was toppled in 2001.

Hundreds of human rights activists including Catholic priests and nuns joined a protest in Sri Lanka to pressure the government to arrest the masterminds behind the 2019 Easter Sunday bombings. The activists took to the streets of Negombo on Wednesday and demanded the government carry out transparent investigations into the attacks.

Father Rohan Silva, executive director of the Center for Society and Religion, lamented that no satisfactory investigation has been carried out since the attacks. Catholic leaders have rejected a government probe report as incomplete and unacceptable. Hundreds of rights activists including priests and nuns hold a demonstration to pressure the government to arrest the masterminds behind the Easter Sunday attacks in Negombo on July 21. (Photo supplied)

Last week Catholic bishops sent a letter to President Gotabaya Rajapaksa calling for fresh inquiries into the whereabouts of the masterminds and requested a credible answer to their questions within one month.

The government has claimed it is sincere about investigations and says nearly 700 people have been arrested. A group of nine suicide bombers affiliated to local Islamist group National Thowheed Jamath targeted three churches and three luxury hotels on Easter Sunday 2019, killing at least 279 people including 37 foreign nationals.

The Thai government has come under fire for using excessive force against peaceful protesters who gathered in capital Bangkok to demand the resignation of Prime Minister Prayut Chan-o-cha for his failures to handle the Covid-19 outbreak.

Protesters have accused the former army chief of a poor response to the pandemic that has led to a massive economic and health crisis. About 2,000 police in riot gear fired rubber bullets, high-powered jets of water and tear gas at mostly young protesters in the Thai capital on Monday as they attempted to dismantle barricades to march to Government House. The crackdown left several protesters injured, triggering a backlash on social media. Prayut was sworn into power in 2014 after ousting an elected government and managed to hang on through a manipulated election in 2019. His tenure has seen the crushing of political opposition and pro-democracy protesters with heavy crackdown and lawsuits.

The government has faced an intense backlash for its disastrous response to the pandemic, which has infected over 400,000 and claimed more than 3,200 lives.

The fate of a Vatican-approved Catholic bishop, 10 priests and an unspecified number of seminarians remains unknown two months since they were arrested by Chinese police for alleged breaches of religious rules.

The 63-year-old Bishop Joseph Zhang Weizhu of Xinxiang in Henan province was arrested on May 21, a day after police detained the priests and seminarians. They have been accused of violating repressive new regulations on religious affairs. The arrests are believed to be linked to the decision of the diocese to use an abandoned factory building as a seminary. A Marian procession at the shrine dedicated to Our Lady of Sheshan near Shanghai in China.

Bishop Zhang was appointed by the Vatican and was ordained secretly in 1991. However, he faced constant pressure from the state, was barred from observing duties as a bishop and was arrested several times. He was not recognized by Chinese authorities despite the 2018 Vatican-China agreement on bishop appointments.

Catholics claim there has been an increase in persecution that aims to eliminate China’s underground church and to pressure Catholics to join two state-aligned bodies — the Bishops’ Conference of the Catholic Church in China and the Chinese Catholic Patriotic Association.

Korea Hope Foundation, a Catholic charity in South Korea is raising funds to support hundreds of refugees in a conflict-torn Catholic stronghold in eastern Myanmar.

The Seoul based charity run by Father Choi Ki-sik, has appealed to the faithful in Korea to join the campaign to help refugees from Kayah state who are battling cold, hunger and poor sanitation during the long rainy season. Children from Pu Phar village, displaced after fighting between the Myanmar military and members of the People's Defence Force, attend a school lesson under a makeshift structure as they take refuge in the jungle near Demoso, Kayah state, on July 3. (Photo: AFP)

The charity plans to use donations to supply tents, sleeping bags, coats, raincoats, flu and malaria prevention medicines and hygiene products to the refugees. In April and May, the foundation carried out an emergency campaign to support the Myanmar Democratization Movement and raised 55 million won which is around 47,000 US Dollars, that helped in covering transportation, communication costs and food and medicines for activists and 2,640 refugee families.

Meanwhile, Korean Catholics from Seoul Archdiocese have donated US$ 43,000 to provide essential medicines and equipment to medical teams and volunteers at church-run clinics in Loikaw Diocese that covers Kayah state.

Catholic Church in Timor-Leste is establishing the first Catholic university in the country. Archbishop Dom Virgilio do Carmo da Silva of Dili Archdiocese applied to the Ministry of Higher Education on July 16 seeking permission for the university.

The Church will upgrade the Catholic Religious Institute of Dili, which was set up during Indonesian rule, and the new institute will be named the Catholic University of Timor. The institute will have Portuguese as its official language and have social science, education and humanities as initial faculties, while more faculties including health and agriculture will be added next year. The Catholic Church is an influential institution in the tiny Southeast Asian nation that gained independence from Indonesia in 1999 following years of military occupation.

Despite being rich in natural resources including offshore oil and gas reserves, Timor-Leste is a poor country where about 42 percent of its 1.3 million people live below the poverty line.

Commenting Guidelines
UCA News monitors the content of the comments and reserves the right to remove posts that contains abusive, offensive, racist, threatening or harassing comments or personal attacks of any kind.
Support our Catholic journalism with a contribution of any size
Your contribution will help the Catholic journalists and editors in UCA News to report news, features, commentaries, video stories and podcasts on issues affecting the lives of millions of Catholics around the world.
Here is a gift of two valuable books as a token of appreciation to you. Check your mailbox for links to these PDF/e-Books.