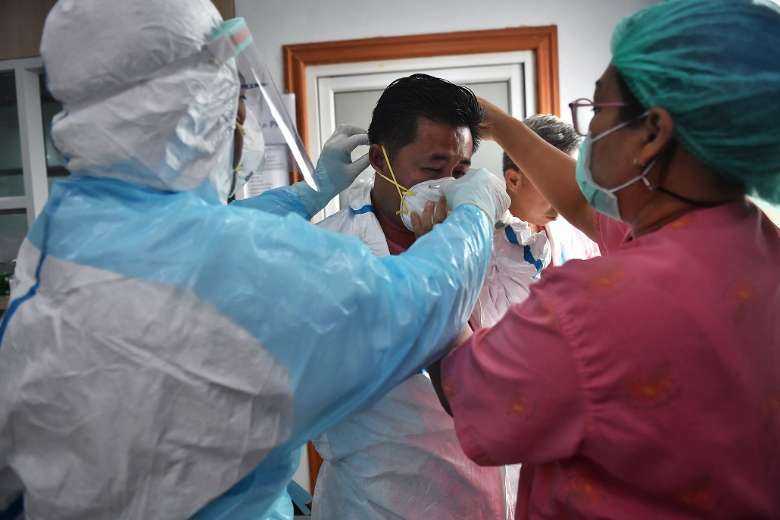 A health worker puts on full personal protective equipment before going inside a Covid-19 field hospital, recently set up to combat the spread of the contagion, in Bangkok on April 10. (Photo: AFP)

Relations between Cambodia and Thailand are being sorely tested by the pandemic after the number of confirmed Covid-19 cases in both countries dramatically surged, driven almost exclusively by an outbreak of the UK variant.

Thailand has been quick to implicate Cambodia, which traced its third local outbreak — known here as the February 20 Community Event — to two young Chinese women who breached quarantine and went out partying in Phnom Penh nightclubs.

Yong Poovorawan, a senior virologist with the faculty of medicine at Chulalongkorn University, said the UK variant could have arrived in Thailand by overland from Cambodia, adding that the first UK variant was detected on Feb. 15.

The UK variant, he said, was found in Chinese and Indian people who entered Thailand from Cambodia in February.

In Phnom Penh, that prompted one government-friendly newspaper to declare: “Blame game over origins of UK Covid variant in Thailand, Cambodia suspected.”

Authorities have since said the same UK variant as detected in Cambodia was discovered amid a Covid cluster found in pubs in a Bangkok tourist district last week.

Despite its closure, the land border is porous and illegal crossings have been a major headache for both countries ever since the pandemic erupted about 14 months ago, with about 90,000 unemployed Cambodian workers trying to return home earlier this year.

Officials are also warning that a new wave of people smuggling had emerged, run by agents in Bangkok seeking to exploit cheap labor from people who are in desperate need of money, the direct result of the economic impact from the pandemic.

However, Thailand and Cambodia have also earned widespread praise for their respective handling of the disease in its first year when confirmed cases were kept relatively low while the disease was wreaking havoc in Europe and the United States.

That changed quickly. In Cambodia confirmed cases have soared to 4,515 with at least 30 deaths, which compares with just 484 cases and no deaths before Feb. 20.

Thailand has followed suit and over the weekend hit a record with nearly 1,000 cases recorded in a single day amid its third wave and warnings the outbreak could take months to contain.

"The main source of the infections is in Bangkok's entertainment venues, which could take longer to contain, depending on measures," Kiatiphum Wongrajit, permanent secretary for health, said in a statement. Entertainment venues have closed across 44 provinces.

Thailand, with a much greater population than Cambodia, has recorded 31,658 cases and 97 deaths and the Department of Disease Control said in a worst-case scenario Thailand could see 28,000 new cases a day if those infected with the virus fail to follow the government’s safety measures.

“We are not that confident. But we are doing our best,” Thailand’s Deputy Public Health Minister Sathit Pitutecha said on April 11.

It’s a situation that could be made much worse by New Year holidays in Cambodia and Thailand and the World Health Organization has advised people not to travel, stay home and follow strict rules in a bid to curb the disease.

Celebrations, including water splashing, water pistols and dousing people with flour, have been scrapped amid assumptions case numbers will continue to climb.

Authorities in Cambodia, where much of the country is locked down, are turning conference centers into hospital wards amid fears its fragile health system will be unable to cope. In Thailand 10 field hospitals are being prepared.

The health ministry says about one million Cambodians have been vaccinated against the disease, out of a population of 16 million, since its rollout began on Feb. 10 and the government intends to inoculate 10 million of its citizens.

Thailand, on the other hand, is much further behind after insisting a vaccine would be produced locally “by Thais for Thais.” It went into trials two weeks ago and is not expected to be rolled out until next year.

In the meantime, Thai health officials have vaccinated just 485,987 people — less than one percent of a population of 70 million — and the government has promised to do more in accessing foreign-made vaccines.

“It would be easy for the Thais to criticize Cambodia for the spread of the UK variant,” one analyst who declined to be named said. “From a regional perspective, it does appear to have emerged out of there, but this is a pandemic and how countries respond is the critical point.”