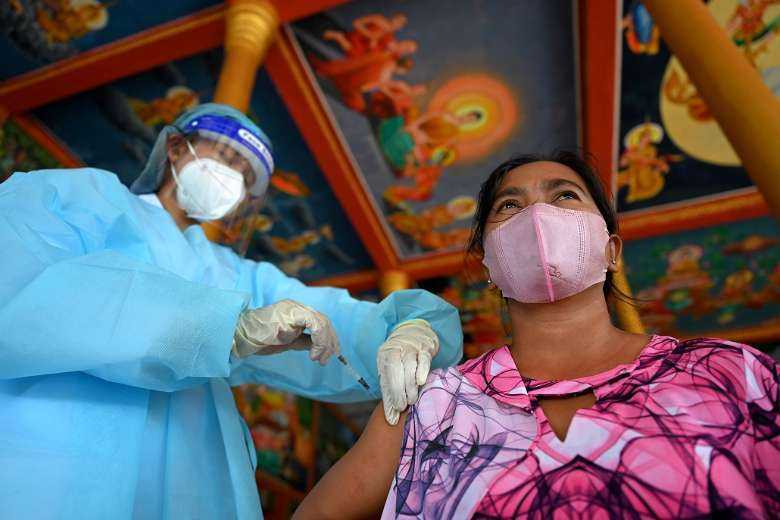 A woman receives a Sinopharm Covid-19 vaccine at a pagoda in Kandal province on June 10, part of the Cambodian government's campaign to halt the rising number of cases of the virus. (Photo: AFP)

The number of Covid-19 cases is surging near record levels in Cambodia as the pandemic stretches out across the countryside, with markets, prisons, factories and the Delta variant providing the biggest headaches for authorities.

The Alpha variant, formerly known as the UK variant, has created the biggest problem alongside the February 20 Community Event which erupted after two women from China bribed their way out of quarantine and went partying.

Thailand has claimed Cambodia is a source country for the variant, although this was disputed by local authorities who said that variant originated in a Thai shrimp market after being carried into the country by migrant workers from Myanmar.

However, the biggest concern is the Delta variant, first discovered in India, with quarantine extended from two to three weeks with separate treatment centers established for carriers of that variant.

Transmission is something that no one clearly knows. It’s a pandemic and it needs measures to be followed

Factories and markets across the country and prisons in central Takeo province are proving the biggest headaches for the authorities. However, recoveries in eastern provinces including Mondulkiri and Prey Veng are outnumbering new infections.

In Phnom Penh, Boeung Keng Kang and Olympic markets were again closed over the weekend after hundreds of people tested positive.

“Transmission is something that no one clearly knows. It’s a pandemic and it needs measures to be followed. We have acted on two markets to prevent Covid-19 from spreading on a large scale,” he said.

The government has increased the number of private hospitals authorized to treat the disease.

Li also said more Delta cases were expected in Cambodia after at least 10 cases of the variant were detected in June, mostly among migrant workers in border areas wanting to return home.

“We are facing both ongoing and new challenges in suppressing transmission. Let’s implement all Covid-19 measures together,” she said.

“The virus continues to mutate. We must be very vigilant. We all need to make our right choices to stop virus spread and prevent the worst-case scenario.”

Almost 20 percent of Cambodia’s 16.5 million people have been fully vaccinated and more than 27 percent have received a single jab, with plans to have enough vaccines in-country by August.

The government says it is on track to inoculate the 10 million people required to achieve herd immunity by the year’s end or earlier.