“Sir/Madam, please give me some money. I didn’t have my lunch today,” a middle-aged beggar cries out in Monipuripara, a middle-class neighborhood in Dhaka, as he desperately pleads for help.

The cry for help draws the attention of some residents who give him some food or money, but most don’t bother.

It has been a daily scene in most neighborhoods in Bangladesh’s capital since the Covid-19 pandemic hit the country in March. The virus has infected over 380,000 and killed over 5,400 people, but the worst sufferers are poor people whose lives have been turned upside down.

The economic fallout of the disaster has been huge for the South Asian nation of more than 160 million where 25 percent of people are classified as extremely poor who cannot earn $US1.90 per day, the global threshold of poverty.

The World Bank has predicted that Covid-19 is poised to push about 100 million people globally, mostly workers from the unorganized labor sector and their families, into extreme poverty.

Millions have lost jobs and income and resorted to an undignified return to rural areas from where they fled for the cities seeking a better life. People who once made a decent living from working in factories or running grocery stores have become daily wagers, rickshaw pullers or beggars. Their children are at great risk of dropping out of school.

Government cash incentives of a few thousand rupees, subsidized food and minimal aid from various groups have been insufficient and meant little to them.

A similar tragic situation continues to prevail in South Asian countries including India and Pakistan where poor people have been literally left out. The agony and deaths of India’s poor migrant workers walking back home after losing jobs in well-off states are still fresh in the memory.

This misery of poor people is the worst outcome of the global pandemic. In the world today, one in every 10 people or about 700 million people live in extreme poverty and about half of the world’s poor live in South Asia, according to United Nations data.

On the other hand, the world’s richest 26 people have wealth equal to 50 percent of the global population, British charity Oxfam reported in 2019.

This massive rich-poor chasm hinders the fight against poverty across the globe. Oxfam’s report noted the wealth of the world’s 2,200 billionaires increased by $2.5 billion a day in 2018, while some 8 percent of employed workers continued to live in extreme poverty.

The pandemic exposed the fault lines in the global economic system that has been long been criticized as unfair, unjust and anti-poor.

Covid-19 does not discriminate between rich and poor, but there is no doubt it has hit hardest the most vulnerable — the poor.

During this prolonged crisis, for many rural poor in countries like Bangladesh and India, having a full meal a day has been a miracle, while soaps and sanitizers are nothing less than luxuries. The World Food Program warned that about 265 million poor people are likely to suffer from chronic hunger for years due to Covid-19.

Poor people are not only poor because they don’t have enough money, food, clothes, good housing or education; it is mostly denial and lack of access to facilities and opportunities that could pull them out of poverty.

In the social, political, economic, cultural and religious spectrum, the poor are always placed in the back seat. They are mere actors, workers and spectators, but never leaders. Political leaders, with some exceptions, are always from the upper class and castes. In most cases well-off and influential people are entitled places in religious bodies like a mosque committee or parish council. The poor have little to nothing to do when it comes to policy or decision making.

In many parts of the world including Bangladesh, the worth of a person is measured by wealth, not by intelligence or qualities.

The media is no exception in the treatment of rich and poor because it mostly survives on the mercy of the rich and powerful. Anything related to the rich and ruling class makes headlines more than the tragic life of millions of poor. What a rich actor or businessman eats or wears creates more buzz than the poor dying without food and treatment.

It means the poor are always at the mercy of the rich, who dominate every sphere of life and living. In such an unequal state and world order controlled by extreme globalization, consumerist culture and greed of the rich, the poor are simply Godforsaken people.

Poverty is not always inevitable

Like many other human miseries in today’s world, poverty is not inevitable but imposed, said Father Joseph Wresinski, a prominent French Catholic priest who battles to uplift people from extreme poverty and whose tireless anti-poverty efforts paved the way for International Day for Eradication of Poverty, observed on Oct. 17 every year.

Father Wrensinski’s vision is line with Pope Francis’ repeated calls for an inclusive economy and equality for all.

Pope Francis denounced an “economy and financial system lacking in ethics” and “utter disregard for human life” and expressed frustration that “money rules today, not man.”

The global and national systems dominated by the rich have enslaved us so much that we don’t feel bad or sympathize anymore when poor people die of hunger, malnutrition and illness, even on our doorsteps.

Truly, poverty is not inevitable but it has become dehumanizing and degenerating because of an extremely unfair system and our deplorable apathy.

Unless we think otherwise and act differently, global, national and local efforts to eliminate poverty will remain ornamental and illusive.

Rock Ronald Rozario is a journalist and bureau chief for UCA News in Dhaka, Bangladesh. The views expressed in this article are those of the author and do not necessarily reflect the official editorial position of UCA News. 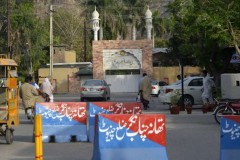