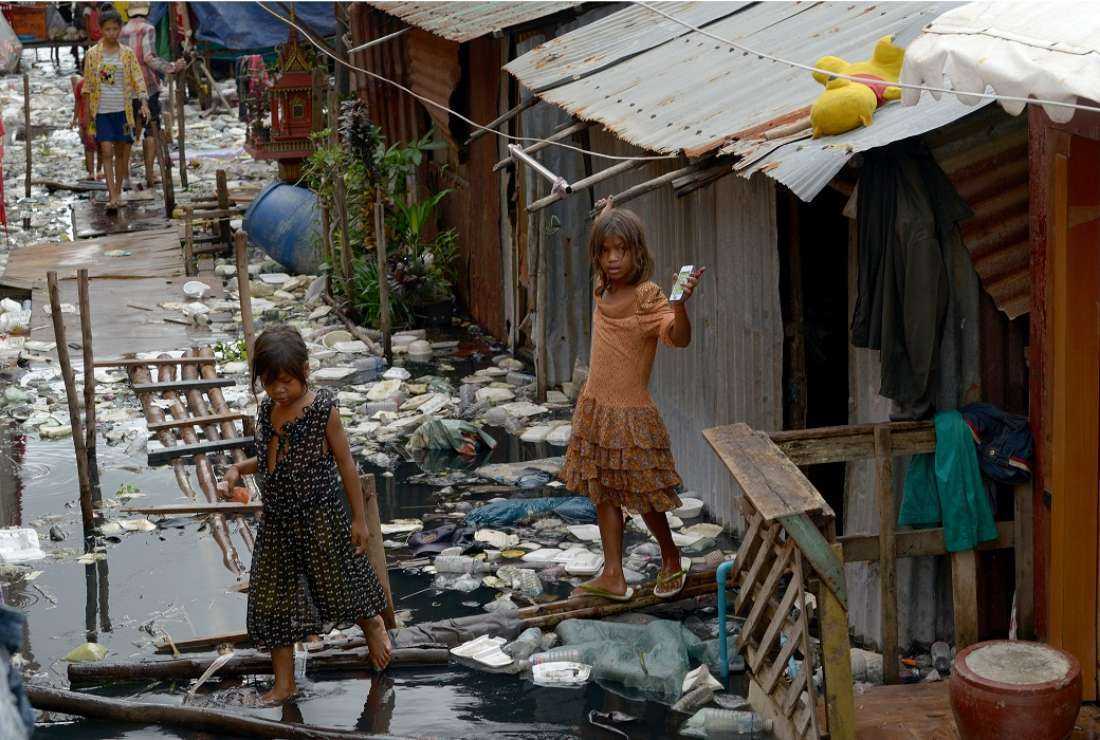 Cambodian children wade in polluted water at a village in Phnom Penh on Oct 18, 2017. (Photo: AFP)

The Covid-19 pandemic ended a decade of unprecedented economic growth and poverty reduction in Cambodia and pushed about 460,000 people into poverty, a World Bank Poverty Assessment Report, released on Nov. 28, found.

Entitled, “Toward A More Inclusive and Resilient Cambodia,” the World Bank noted that Cambodia’s poverty rate fell by almost half between 2009 and 2019, when the global economy was experiencing strong growth rates.

As a result, it said Cambodia’s poverty rate had dropped from 33.8 percent to 17.8 percent over the 10-year period with almost two million Cambodians escaping poverty.

But it said the Covid-19 pandemic, which erupted in late 2019, had reversed the poverty reduction progress and the poverty rate has since increased by 2.8 percentage points, indicating that around 460,000 people have fallen below poverty income thresholds.

“However, despite this impressive success, many households remained vulnerable, with few savings or safety nets. This meant Covid-19 dealt a setback [to] the country’s progress in combating poverty as employment and wages diminished.”

According to the World Bank website, Cambodia has recently redefined the poverty line, using the most recent Cambodia Socio-Economic Survey for 2019/20. The national poverty line is now 10,951 riel per person per day or the equivalent of US$2.70.

The Cambodian economy, like elsewhere, was shut down by the pandemic, however, the economic hardships were exacerbated by an exodus of Western businesses that followed a government crackdown on opposition political parties, the media, unions and NGOs, initiated in 2017.

Chinese investment and largesse, then emerged as the biggest foreign contributor to the national economy but that too faded as the pandemic took hold.

The World Bank added that during the decade-long growth phase “rising non-farm earnings, for example in the tourism, garment and construction sectors, contributed most to poverty reduction.”

Meanwhile, trade and investment-led growth had supported a structural transformation in the economy which had led to more productive sectors, creating better-paid manufacturing and services jobs, enabling workers to move out of low-paying agriculture and boost their earnings.

“At the same time, living conditions and access to basic services such as electricity, water supply, sanitation, health, and education improved for broad segments of the population. This improvement has narrowed standard-of-living gaps between rural and urban households,” it said.

As the economy tanked, Cambodia was widely praised for a swift roll-out of its Civid-19 vaccination program and it was one of the first countries in Southeast Asia to ease pandemic travel restrictions and open up its borders.

The World Bank said Cambodia could consider a range of policy actions, to support a more inclusive and resilient recovery from the pandemic and the economic shocks that came with it.

“These include targeted cash transfers, steps to strengthening social protection, investments in health and education,” the World Bank report said.