It is time for the whole Church — bishops, priests and laity — to seek God's guidance together 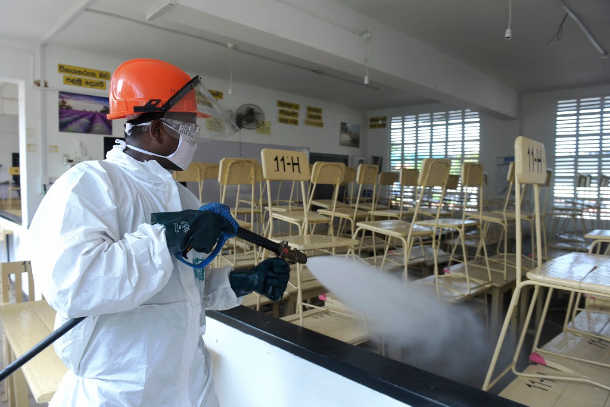 A health worker sprays disinfectant in a classroom at a school in the Colombo suburb of Nugegoda on June 19. Schools in Sri Lanka will reopen later this month. (Photo: Lakruwan Wanniarachichi/AFP)

The liturgical lockdown became a knockout in Sri Lanka, disrupting normal life from March 20. Let us look from a liturgical perspective at the lockdown and physical distancing in order to prevent the spread of Covid-19.

Let me begin our reflection with a few questions. Was the lockdown taken seriously by Christians? Did it hurt your liturgical life? Did it become a negative reality? Why were there so many curfew breakers?

Probably many people had the opportunity to have much more information regarding the positives than the negatives arising from the coronavirus.

The impact on the natural world was observed in many countries including Sri Lanka. It was reported the conditions of rivers, oceans and the ozone layer had improved; the air too had cleared in many big cities across the world. The importance of nature is asserted by the lockdown, indicating that the existing systems were defective and needed change.

It will be necessary only to pose a few queries pertaining to our faith and practices. All places of worship were closed and many things did not happen. The authorities took a three-pronged approach — testing, tracking and isolating, and quarantine.

For Christians, the Sunday obligation had to be abandoned for 14 Sundays. The sacraments were celebrated with no public participation. Even after the end of the lockdown, funerals were conducted only at home and the cemetery due to difficulties of disinfection.

Infected Christians who were called to eternal reward were not buried but cremated with the approval of Cardinal Malcolm Ranjith and with minimal religious observances.

When the minister of a minority passed away, all health ministry rules and regulations were flouted for the function with no masks and no physical distancing. They were allowed to have their own way because of the forthcoming elections to get their support.

When Masses were livestreamed (a newly coined word), popularly called TV Eucharist, there was domination by a few individuals. Holy Week and Easter were celebrated in a very subdued manner. Did it indicate that the leaders were concerned with matters of ritual in their approach?

The lifting of some restrictions on June 12 allowed Sunday Eucharist limited to 50 persons.

Some congregations made use of technology to conduct online retreats, prayer services and local and international leadership meetings. But priests in the archdiocese had to rely on text messages to reach the faithful. Meanwhile, many schools and private tutors held classes online to continue education even for primary and pre-school children.

Pandemics are not new. Over history, even in the Bible, many such calamities have been recorded, causing countless deaths.

It was unfortunate that many in Sri Lanka failed to carry out the instructions from the Vatican regarding Laudato Si' Week from May 16-24, commemorating the fifth anniversary of the encyclical.

Church leaders probably could not convey the message to the people and send guidelines. Few congregations were aware and few activists were able to do it. Now there is a seven-year plan proposed by the Vatican dicasteries from 2021.

Covid-19 had an impact all over the world. The calamity continues in Sri Lanka due to the arrival of passengers from foreign countries. There was a delay in closing the airport and testing infected persons.

From March 15, there was a certain sense of fear of the disease as there was no medicine yet and tests had begun very late. There was uncertainty all around among leading nations as well as in Sri Lanka. It was the fear of untimely death that dominated.

Unfortunately, it is sad to state that some preachers began to proclaim that this pandemic was a divine punishment. The Easter carnage in April 2019 was also described in the same manner. They have forgotten that the Christian or Biblical God is not a God inflicting punishment, He is a loving God. There is a possibility that God can reveal a message in this sad event.

One could ask whether church leaders did not make use of the opportunities available through TV broadcasts to educate the people in faith. Instead of merely repeating the same ritualistic exercises, they should have instructed people how to behave during the curfew and to build family relationships through prayer and Bible reading and discussion. A few families expressed to this writer that they were really happy to read the Holy Book and discuss and pray and now they are united as a family.

The pandemic gave leaders the opportunity to think in a novel way, not to do everything that was done before. The normal way has to be different in a new system that has to emerge within society, in all areas of human life, the natural world and a social way seeking to be a brother and sister to others.

Concerning the future, it is not back to the same old man-made situations but to seek divine inspiration through the Holy Spirit.

In this attempt there must be audacity to discern and take bold steps, not merely individually but with consultation of both priests and laypeople, for they too will be inspired by the Holy Spirit.

If this is a failure, the fault lies with those livestreaming church leaders who merely followed rituals when they could have educated the faithful to read the word of God and seek God’s will through discernment.

The important element is human-centered activities in response to the Church’s pastoral approach. The Church began a new series of teachings called Catholic Social Teaching initiated by Pope Leo XIII in 1891, which remains a dead letter even up to now. It is time for the whole Church — the leadership including bishops, priests and laity — to seek God’s guidance together.

Though the Church is hierarchical in its structure, it is defined as the people of God. These concepts remain in the textbooks and in church law.

The process must not be limited to the clergy. They can guide and provide vision, but the laity must be given the freedom to propose changes. It is not to define new teachings but to create a new pastoral approach. The people take priority, not the buildings. Perhaps it is necessary to give up the office-day system in the parish and to be with the people in their protests over the denial of human concerns and social issues.

Such failures must be assessed not in a critical way but as a means for renewal of the Church. Attachment to power and money can become deterrents that hinder the pastoral approach of the Church.

If these few proposals are followed, then we can prepare for the 2022 Synod of Bishops with the theme of synodality and hope that the Church in Sri Lanka will truly become synodal in approach by listening to the people and seeking their help when making decisions. It is counter to the top-down approach but opens the door to new vistas, new ways of thinking.

Father Reid Shelton Fernando is a prominent human rights defender. He was a university lecturer and former chaplain of the Young Christian Workers Movement. He is well known in Sri Lanka for his commentaries on social and political issues. The views expressed in this article are those of the author and do not necessarily reflect the official editorial position of UCA News.