Nine nuns tested positive for Covid-19, forcing them to avoid gatherings inside their headquarters 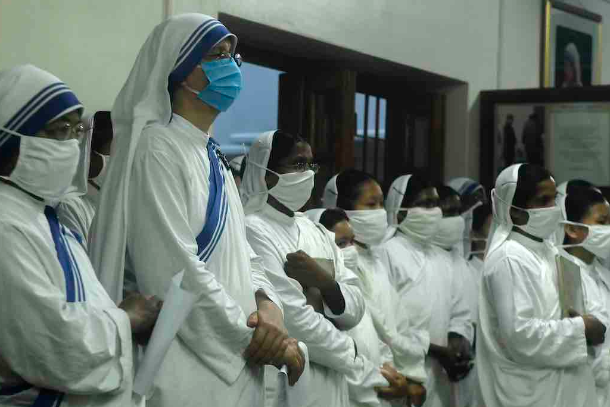 Missionaries of Charity (MC) nuns canceled the usual birth anniversary celebrations of their founder St. Mother Teresa this year after some nuns tested positive for Covid-19.

The saintly nun's 110th birth anniversary passed off without the customary celebrations on Aug. 26 at the congregation's headquarters, 22 years after her death.

After nine nuns tested positive for Covid-19 in their headquarters, the nuns canceled the usual nine-day novena prayer, concelebrated Mass and children's singing and dancing as part of the anniversary.

The MC headquarters in eastern India's Kolkata city, also called the Motherhouse, houses the saintly nun's tomb. It wore a deserted look without the usual flow of friends and pilgrims who come to pay her homage on the anniversary.

A private Mass was held at the tomb on Aug. 26 morning and concelebrated by Father Dominic Gomes, vicar general of Kolkata Archdiocese, said Sunil Lucas, an MC volunteer.

As of Aug. 26, seven of the nine nuns had recovered, Lucas said.

The headquarters houses some 100 nuns including novices, an MC nun told UCA News. She said they have been restricting visitors and avoiding gatherings since mid-March when the virus began to spread in the country.

Despite the threat of infection, "these fearless Covid-19 warriors had been going out daily to serve the poorest of the poor. And some contracted the infection," Lucas said.

Since Mother Teresa's death on Sept. 5, 1997, the nuns have marked her birth anniversary by starting a nine-day prayer leading to her death anniversary. After her canonization in 2016, the novena became preparation for her feast day on Sept. 5.

Thousands used to visit the tomb during these nine days to place their petitions in a box on Mother Teresa's grave, take photographs, cherish relics or merely touch her tomb, seeking the blessings of the saintly woman who walked among them two decades ago. Helping the work of a saint in Calcutta However, the little wooden door to the entrance of the Motherhouse now remains shut. No visitors are allowed. Some people bringing garlands and flowers for the tomb ring the doorbell, and a nun accepts the offerings.

A senior nun told UCA News that none of the nuns can go out now, but their work for the poor in their several houses for orphan children and the dying continue unhindered.

"They are all functioning with the help of sisters and volunteers who stay in those houses. We are not taking any new admissions now," the nun said, requesting anonymity as they are not supposed to speak to the media.