Controls on religion inside Tibet have intensified 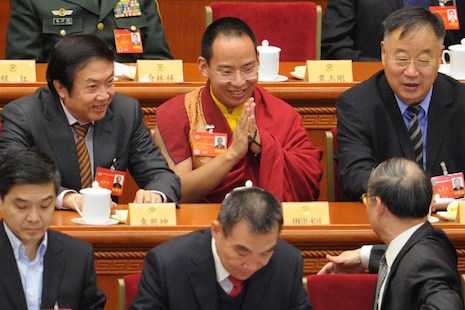 The 11th Panchen Lama, Gyaltsen Norbu, center, a Tibetan Buddhist leader selected by Beijing but not recognized by the Dalai Lama, is pictured at a gathering in Beijing in March 2014. (Photo by Wang Zhao/AFP)

Gyaltsen Norbu, the Panchen Lama installed by the Chinese government, has called for tighter controls over monks to ensure they follow Buddhist precepts in what is already among the most strictly managed Buddhist societies.

Roaming monks not based at any one temple are particularly prone to breaking precepts, Norbu said in rare public comments on Oct. 25 at the Fourth World Buddhist Forum in Wuxi, near Shanghai.

"It would also be difficult for any other authority or the police to seize them if they do not break the law," said Norbu.

Although his suggestions mark a stricter line on Buddhist doctrine, they also tie into Beijing's desire for greater overarching management of monks in Tibet. In trying to curb dissent against Chinese rule, Communist Party authorities have found roaming monks difficult to manage because they are often away from monasteries — the main institution used to control the monkhood.

In recent years, Beijing has insisted Tibetan monks follow Buddhist precepts. Statements by officials and experts in state media have warned the recent spate of Tibetan self-immolations in protest of Chinese rule – at least 140 since an uprising in 2008 – go against the Buddhist doctrine.

Alongside efforts to bind monks to their own precepts, authorities have introduced new rules and policies at monasteries, all of which are now manned by police.

"Controls on religion inside Tibet have intensified especially after 2008," said Tsering Tsomo, executive director of the Tibetan Center for Human Rights and Democracy in Dharamsala, north India. "Why are they doing this? There is a reason: these are efforts to secularize monks."

Norbu's remarks represent a return to the party line after a speech in March in which he warned that China's quotas on Tibetan monks and nuns – a rarely acknowledged open secret – meant "a danger of Buddhism existing in name only."

His comments were viewed by some observers as a jab at Beijing's Tibet policies. However, other analysts noted the Communist Party would have vetted his speech in advance.

Three months later, President Xi Jinping called a meeting in which Norbu said he would "not fail to live up to the ardent expectations of the party and people."

Since then, Beijing has typically used the World Buddhist Forum as a stage to expose Norbu to the wider Buddhist community, with varying degrees of success. At the First World Buddhist Forum in 2006, the then 16-year-old lama was reportedly shunned by visiting Buddhists despite Beijing making him figurehead of the inaugural event.