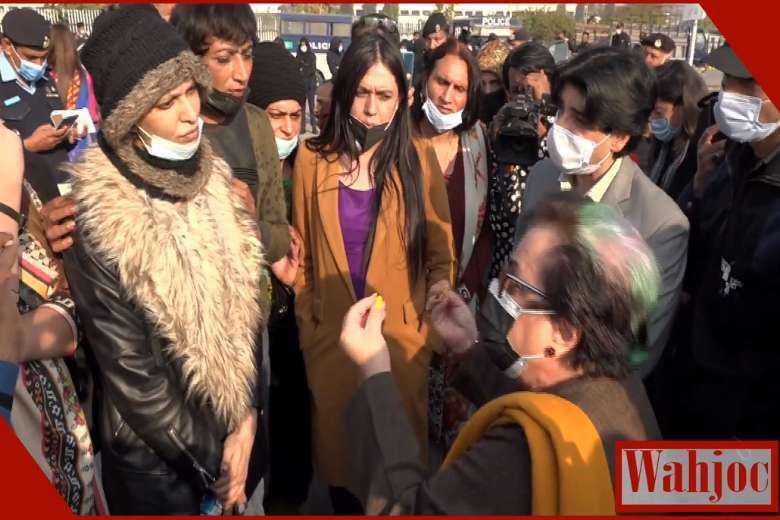 Nadra Khan is campaigning for justice after a bank manager rejected her application to open an account.

“People make us dance but enjoy bank accounts. The dancers can’t have one. I perform in functions for my bread. I don’t have any other source of income. You have insulted me,” she said in a video posted on Facebook on Jan. 15.

“Most of our community members in Pakistan do not own houses. We can’t loot or steal. Banks should instead provide us interest-free loans for housing, car finance and business. Do something good.”

Khan, who registered Hazara Transgender Associates last year with the Security Exchange Commission, referred to her recent visit to Meezan Bank in Mansehra in Khyber Pakhtunkhwa province in northwest Pakistan.

On Jan. 14, she was informed that the bank’s Sharia board had rejected her request to open an account because of “un-Islamic” income.

“Such people are the real hurdle in our life of dignity. Meezan Bank has no right to make fun of me or my income. I am really under stress,” said Khan.

Meanwhile, in Islamabad, members of the transgender community protested on Jan. 11 outside parliament and Islamabad Press Club to demand justice for Rimal Ali, Pakistan’s first transgender model, a victim of torture and rape. Ali accused Jahanzeb Khan of Attock in Khyber Pakhtunkhwa of shaving her eyebrows and hair and burning her with cigarettes.

Federal Minister for Human Rights Shireen Mazari assured the protesters of action and offered legal aid to Ali. Mazari directed the concerned police station to take action against those involved in the incident and promised a new law for the transgender community.

In a Jan. 13 video message on Twitter, Ali thanked police and politicians for their cooperation.

“We are receiving threatening messages and calls. People are following us. We demand a non-bailable warrant for Jahanzeb Khan. He didn’t even appear at the police station. We are only demanding our right to live,” she said.

Muslim transgender people complain of being insulted and mocked and stopped from entering mosques. They are questioned about Islamic practices and proclamations, they say.

The number of transgender people recorded in Pakistan's census in 2017 was 10,418.

In 2009, Pakistan became one of the few Islamic countries to recognize transgender people legally. In 2018, Marvia Malik became the first transgender television news anchor in the Islamic republic.

In August 2020, Karachi-based female pastor Ghazala Shafique established St. Jeremiah Church, the first church for transgender people in Mehran, a seaport city. The congregation of 30 moved to her house for weekly Friday prayers in September.

“They preferred a dedicated service instead of a mixed one to avoid the stares. They are still insecure on roads. In the compound of my house, they hang out after the service and share their challenges,” Shafique told UCA News.

The pastor has been successful in recording video messages of several clerics in Karachi accepting transgender people among the faithful.

“A mosque for transgenders has been reopened in Islamabad. Another was opened last week in Karachi. Ali used her celebrity status to get government attention but the community is generally poor, facing problems on a daily basis,” said Shafique.

Despite the passing of several laws and policies to protect the rights of transgender people, they continue to suffer prejudice and violence, say rights groups.

“Pakistan’s penal code continued to criminalize same-sex sexual conduct, placing men who have sex with men and transgender people at risk of police abuse, and other violence and discrimination. At least 65 transgender women have been killed in KP province since 2015,” it claims.

Police in Karachi found the mutilated body of 40-year-old transgender Guddu at a house in Clifton area at the weekend, ARY News reported. The police said the body bore torture marks as if she had been mauled by animals.

That same evening baton-wielding transgender people in Chiniot, Punjab province, protested against police for raiding a birthday party. “Police are thieves,” they shouted. A constable was injured.