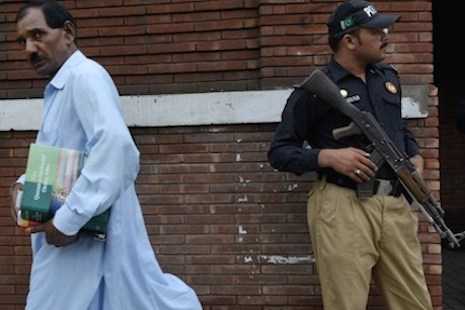 Ashiq Masih, left, husband of Asia Bibi, a Christian woman facing a death sentence for blasphemy, carries law books as he comes out from the Supreme Court in Lahore on July 22. (Photo: AFP/Arif ALI)

Pakistan's top court has suspended the execution of Asia Bibi, a Catholic woman sentenced to death for blasphemy, after agreeing to hear her appeal.

A three-judge bench on July 22 ordered a halt to the execution pending the outcome of the appeal.

Bibi was arrested in Sheikhupura district of Punjab province in 2009 after being accused of insulting the Prophet Mohammad, a charge she denies.

A trial court subsequently charged Bibi with blasphemy and sentenced her to death in November 2010.

Bibi says she was targeted after she drank water from a vessel fellow Muslim workers were using.

She was told it was forbidden for Christians to drink water from the same vessel.

Several workers complained to a cleric that she had insulted Muhammad prompting an angry mob to attack her, she says.

The blasphemy charges followed soon after, she said.

In October last year, the Lahore High Court dismissed Bibi's appeal and upheld her death sentence. Her husband, Ashiq Masih, then appealed to Pakistan's president for clemency and filed an appeal in the Supreme Court.

The court is yet to set a date to hear the appeal, Bibi's lawyer, Saif ul Malook, told ucanews.com.

The National Commission for Justice and Peace, the human rights body of the Catholic Church in Pakistan, welcomed the Supreme Court's decision.

"The Supreme Court is the highest judicial forum and we are very much hopeful that justice will prevail and Asia Bibi will walk free," Cecil Chaudhry, the commission's executive director, told ucanews.com.

"It is a positive thing that the Supreme Court has decided to review Asia Bibi's case," he said.