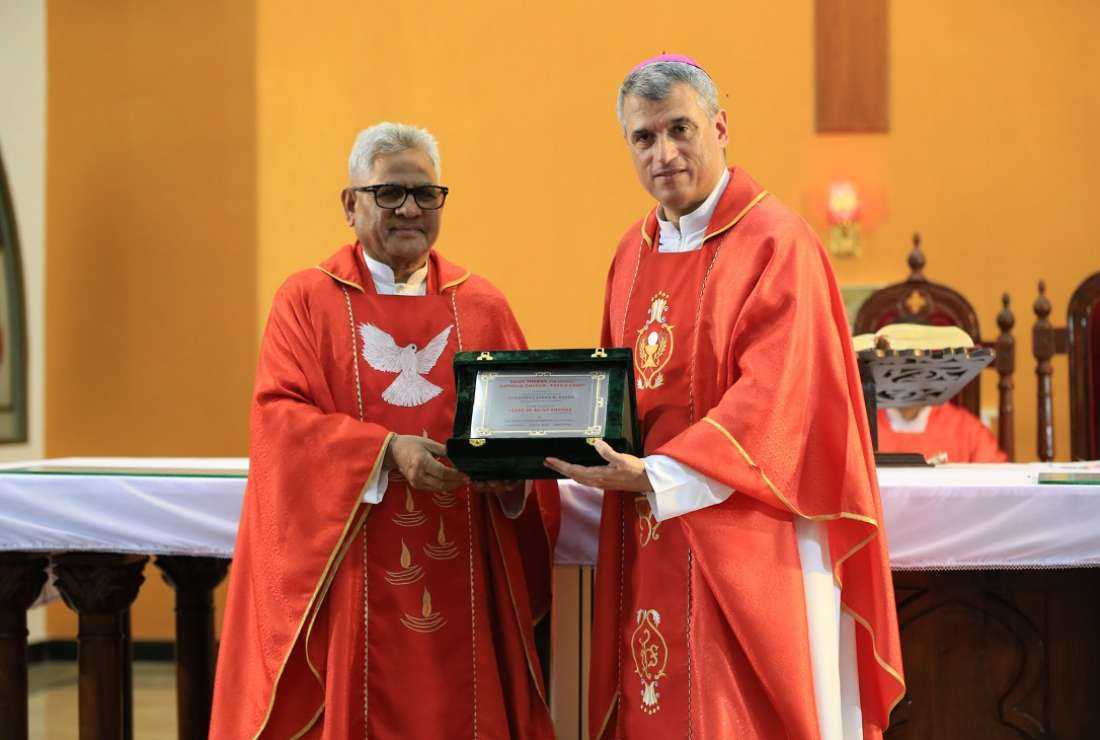 Parkash Aslam organized 14 seminars on St. Thomas the Apostle prior to the annual pilgrimage at the archaeological site of Sirkap in Taxila, Punjab province.

“Many faithful still have no idea about St. Thomas the Apostle. Both priests and catechists are only interested in celebrating regular Masses. A series of seminars on Catholic saints, especially the Doubting Thomas can help strengthen the faith of minority Christians,” he told UCA News.

Since May, the volunteer of the St. Thomas group at St. Gerard Church in Faisalabad has been organizing sessions on one of the Twelve Apostles of Jesus in Catholic churches in Faisalabad inviting the faithful to join the July 3 pilgrimage to Sirkap which is home to the ruins of the first church on the Subcontinent.

According to tradition, St. Thomas passed through Taxila on his way to India and preached at the court of King Gondophares. An early 3rd-century Syriac work known as the "Acts of Thomas," discovered in 1822 in Syria, says the king gave some money to the saint and ordered him to build a royal palace.

St. Thomas, however, gave away all of the money in alms and when the king discovered his disobedience, he ordered that the saint be burnt alive.

Meanwhile, the king’s brother, Gad, died and then miraculously came back to life, whereupon he recounted that in heaven he had seen a palace built for Gondophares by St. Thomas. The king pardoned the saint and converted to Christianity, along with the people of the capital.

One legend has it that St. Thomas himself constructed the throne and preached here for 40 years. As the pilgrimage grew over years in northern Pakistan, the tradition of July 1-3 pilgrimages morphed into an annual fair in 1992.

Volunteers of the St. Thomas group accompanied eight buses from Faisalabad, singing hymns and distributing refreshments along 322.3 kilometers north towards Taxila. The group charged each pilgrim 2,500 rupees (US$12).

They were among more than 3,000 pilgrims who prayed and lit candles at the meter-high throne. The pilgrims later visited the Taxila Museum which also displays a “holy bone” relic of St. Thomas.

According to Father Nasir William, director of the Commission for Social Communications in Islamabad-Rawalpindi diocese, it’s a record since the pandemic began in Pakistan in March 2020.

“Huge crowd in groups turned up, especially from different parishes of Punjab and Khyber Pakhtunkhwa provinces. St. Thomas the Apostle Catholic Church, located behind the Taxila museum, added another attraction for pilgrims this year. Parishioners were advised to wear face masks as coronavirus cases climb across the country,” he said.

The National Command and Operation Center has issued fresh guidelines for Eid al-Adha, the Muslim feast of sacrifice, urging people to follow standard operating procedures after a 4.61 percent Covid-19 positive ratio was recorded in the country with 675 cases on July 4.

Meanwhile, Archbishop Christophe Zakhia El-Kassis, the apostolic nuncio to Pakistan, made history on July 4 by becoming the first nuncio to visit Taxila Catholics.

The jubilant parishioners showered rose petals on the nuncio to the beat of the dhol (a double-headed drum) and presented him with a turban, which symbolizes honor in Punjabi culture. He later planted a tree in the compound of St. Thomas the Apostle Church consecrated on May 2.

The archbishop remembered learning about the patron saint of Pakistan from a Muslim guide.

“He informed me and my brother about Jesus Christ and St. Thomas the Apostle. He didn’t know anything about me and I didn’t interrupt. It was fascinating how a non-Christian talked of Christ,” said the nuncio on the sidelines of the feast.

According to Bishop Joseph Indrias Rehmat of Faisalabad, Pope John Paul II kissed the ground when he arrived in Pakistan in February 1981.

“It was in reverence of the apostle. The pilgrimage sites are the fifth gospel as per St. Jerome. We should continue reliving our history,” he said addressing the gathering on July 1 in Saeedabad, a sub-parish unit.

However, Aslam, an electrician, joined pilgrims in complaining about the lack of facilities at Sirkap.

In 2019, Punjab’s former human rights and minority affairs minister, Ejaz Alam Augustine, announced the construction of a chapel and park at the site.

“There is no development. Even some of the trees en route to the throne of St. Thomas have been cut down taking away much-needed shade during the hot and humid season. There was only one toilet,” he said.

“The Archaeology Department didn’t even allow us to put up tents or bring along rice cauldrons. We had to install the food and beverage stalls at the site gate. Twenty rupees were charged as entry fees from each pilgrim. Why should we pay for something that is ours,” he said.