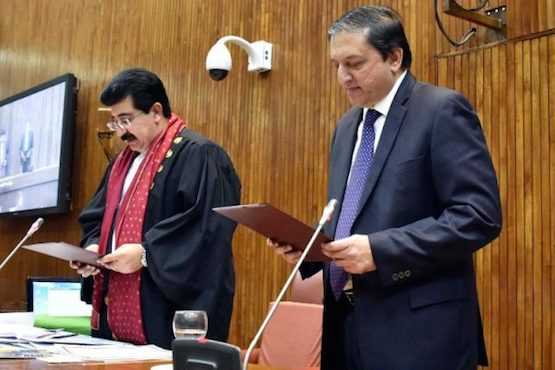 Senator Muhammad Sadiq Sanjrani administers an oath to newly elected Deputy Chairman of the Senate Saleem Mandviwalla at Parliament House in Islamabad on March 12. (Photo provided by the Pakistan government)

The power of Pakistan's center-right ruling party has been challenged by recent moves to fill the top two positions in the Senate with independent and opposition camp figures.

Pundits see this as the work of a too-powerful establishment.

The Senate elections come as the result of an unannounced agreement between various political groups.

The two shocking defeats have left the Pakistan Muslim League-Nawaz (PML-N) red-faced given its majority in the upper house. The PML-N governs Punjab province and Islamabad.

The upset has its roots in events that occurred in January, when Balochistan lawmakers from the ruling party revolted against Chief Minister Sanaullah Zehri, forcing him to resign ahead of a pending no-confidence motion.

The PML-N government was subsequently toppled by opposition figures working in conjunction with renegade members of the ruling party.

As a result, Abdul Qudoos Bizenjo, a Balochistan lawmaker who only claimed 544 votes in the general election, was elected chief minister of the province.

When the Senate elections swung around, PML-N dissenters and opposition lawmakers fielded independents and managed to win six of 11 seats. Ousted Pakistani prime minister Nawaz Sharif, right, claps after his younger brother and Chief Minister of Punjab Province Shahbaz Sharif, center, is elected president of ruling Pakistan Muslim League-Nawaz (PML-N) party at the General Workers Council in Islamabad on March 13. Shahbaz took charge of the party a day after he was outmanoeuvred in elections for the senate chairman, sparking accusations of foul play. (Photo by Aamir Qureshi/AFP)

The opposition Pakistan Tehreek-e-Insaf (PTI) and left-wing PPP then claimed 20 and 13 seats in the Senate, respectively, giving them enough power to form what has been dubbed "an unholy alliance."

They supported independents from Balochistan for the position of Senate chairman.

PML-N leaders and independent political analysts say the establishment is behind the alliance, which they see as as attempt to stop the ruling party from installing its candidate as chairman.

The opposition group has vehemently denied the allegation.

In a rousing speech shortly after the election results were announced, Senator Hasil Bizenjo, a coalition partner of the PML-N, wagged a finger at the establishment for allegedly interfering in the democratic process.

"I'm disappointed to say that today it has been proved that some forces are superior to our parliament," he said.

"Why should I congratulate anyone [on their election victory]? I'm ashamed to sit in this House after today," he added.

"In the name of Balochistan, provincial assemblies have been turned into markets. For God's sake, let this country function democratically!"

Nawaz Sharif, a three-time premier and leader of the PML-N, was disqualified by Pakistan's top court last year over his failure to declare having accepted a salary from his son's UAE-based firm.

Since then, the ruling party has drawn huge crowds as it embarked on a campaign to restore the "sanctity of [a democratic] vote." The party claims it is being punished for defying Pakistan's military.

The confrontation between the military and the then-Nawaz-led federal government started when Pakistan's leading English daily Dawn published a front-page story in October 2016.

The report claimed that influential civilian forces had ordered the army generals to act against both Hafiz Saeed's Lashkar-e-Taiba, which was blamed for a series of terrorist attacks in Mumbai in November 2008, and the Haqqani Network.

It said the civilian forces issued an ultimatum: oppose the two groups or subject the country to international isolation.

According to the story, Punjab Chief Minister Shehbaz Sharif, the younger brother of Nawaz, had complained to General Rizwan Akhtar, the former spy chief, that security forces were working behind the scenes to set free a number of key figures arrested due to pressure from civilian groups.

The news story was termed a "national security leak" and an inquiry was launched to identify the source.

A probe was conducted and, as a result, Nawaz was forced to sack two close aides — Information Minister Pervaiz Rashid and Tariq Fatemi, an adviser on foreign affairs.

Both men have denied any involvement in the leaked story.

However, the inquiry report has not been made public and no details were given about the role of two close Nawaz aides.

Reporters close to the military subsequently ran stories declaring that he and his daughter Maryam Nawaz were the architects of the so-called "Dawn Leaks."

Former army officials, who often appear on local television as security analysts, have tried to create the impression that top military brass are eyeing the ruling family with suspicion due to its alleged role in the leaks.

With the next general elections due to take place in July, the PML-N is now pointing its finger at the establishment, which it claims wants to install a "favorable" government in the capital.

A weak coalition government, or hung parliament, would be seen as favoring the establishment. Pundits say they suspect this is why Pakistan is witnessing such "unnatural" political alliances.