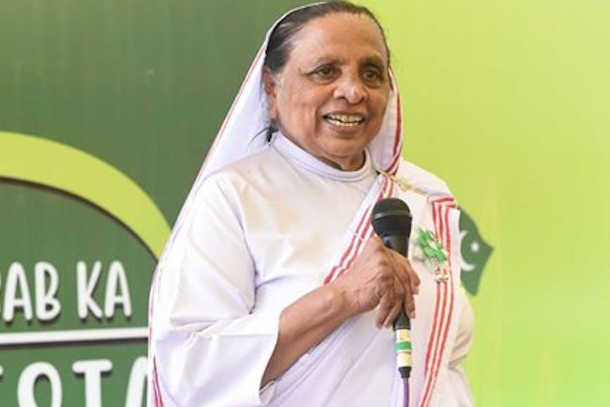 Sister Ruth Lewis, the head of Darul Sukoon home for underprivileged persons with disabilities, died from Covid-19 in a Karachi hospital on July 20. The Catholic nun was 77.

She was on a ventilator at Agha Khan Hospital after contracting the virus on July 8.

In a statement on Facebook, Darul Sukoon expressed deep regret and grief over the passing of Sister Ruth.

"All our children, nuns and staff are heartbroken as we have lost a huge part of us. Please pray for the children to whom she has been a mother, for the nuns for whom she was a sister and a true inspiration and for all the staff who love her and will each day try to walk in her footsteps," it said.

"Her services to humanity and to the destitute, severely disabled children and elderly, socially displaced girls and boys is remarkable. Her service spans around 51 years."

On Feb. 17, 1969, Sister Ruth, Sister Gertrude Lemmens and Sister Margaret D’Costa joined the Karachi home for around 150 mentally and physically disabled people, mostly children and teenagers, founded by the sisters of the Franciscan Missionaries of Christ the King.

“Since then there was no turning back. She took care of such children all her life. The children whom their own families abandoned, children who were called monsters because of deformities and chronic disability, children whose sight could traumatize a layman, children whom people visited to cherish their fully functional body and brain,” said the statement.

“But Sister Ruth became their mother. They were not objects of misery and charity to her but her own children, each unique. She worked tirelessly to make their personality. In such a world where people hire maids and nannies to clean the mess of their own children, she wiped their bums and noses with bare hands.

“She truly was the mother of forgotten ones. No one can fill the void she has left.”

Tributes poured in from government officials and activists after news of the nun’s death was announced.

"Her selfless contributions to our society will always be remembered and cherished," said Murtaza Wahab, a Sindh government spokesman.

She said the nun had selflessly dedicated her entire life to those in need and her dedication to the children of Darul Sukoon would always be remembered.