Women's rights activists hold placards during a protest in Islamabad on Sept. 22 against the brutal killing of Noor Mukadam, the daughter of a former diplomat who was found murdered at a house in Pakistan's capital. Pakistan is ranked as the sixth most dangerous country in the world for women. (Photo: AFP)

Women from religious minorities were the first to be fired when factories closed for the pandemic lockdown last year, according to a survey by a former Oblate leader.

“Those working in beauty parlors, health stores and shopping malls were laid off due to their Christian faith and fear of infection. The surviving groups of minority women kept facing harassment and discrimination in factories, hospitals and brick kilns. Businesses of many non-Muslim families were closed,” Yousuf Gill, a former Oblate superior, told UCA News.

“Christians and Hindus were denied rations by several relief organizations. The pandemic affected the daily life of many impoverished groups, especially minority women and girls, and increased their grievances. The limited social and physical activities gave birth to mental and psychological problems.”

Gill, who founded Umeed (Hope) Partnership Pakistan (UPP) in 2000, a year before leaving the Oblate community, conducted the survey in August based on interviews with more than 400 women in eight slums of Lahore, the capital of Punjab province.

He was speaking at the Oct. 17 launch of the Women’s Voices and Leadership Pakistan project aimed at the Covid-19 recovery needs of minority females. The event marked the conclusion of a three-day training course for 16 women trainers who will initiate capacity-building sessions in Christian communities this week.

“The master trainers include victims of forced conversions, sanitary workers and others who will engage in trauma counseling and provide psycho-social support to non-Muslim women, especially victims of violence. Counseling sessions will focus on meditation, stress management, yoga and healing therapies,” said Gill.

We feel pressure but it’s part of the culture of the subcontinent where the weak are suppressed. Communities suffer on the basis of ethnicity, religion and social status

“The need for self-care and mental well-being is generally ignored by humanitarian organizations who mainly focused on food support to the families affected by the pandemic.”

In March 2020, 35-year-old Sarfaz Masih committed suicide in isolation at his house in Karachi after being diagnosed with a cold and fever. Post-mortem analysis revealed that the Christian father of two, who was fired from a gas pump, was not Covid-19 positive. 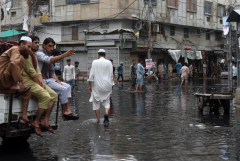 “A dominant feeling in our community is that minorities are suppressed and cannot progress. We feel pressure but it’s part of the culture of the subcontinent where the weak are suppressed. Communities suffer on the basis of ethnicity, religion and social status. We focus on education and work hard to come out of these challenges at the personal and community levels,” he said.

According to Ejaz Alam Augustine, Punjab's minister of human rights and minority affairs, the pandemic of religious discrimination is deadlier than Covid19.

“I support UPP’s initiative but cannot guarantee the end to this mindset. The Church is our biggest platform but even it has no proper program or guidelines. It should focus more on teaching the catechism and ethics to Christian females to combat the increasing forced conversions,” he said.

Pakistan is ranked by the Global Gender Gap Index 2018 as the sixth most dangerous country in the world for women and the second worst in terms of gender equality. Aurat Foundation noted 2,297 cases of violence against women were reported from 25 districts last year.

“Violence against women and girls (VAWG) increased in 2020 as opposed to previous years. Cases were highest at the peak of the pandemic in July and rose again in September due to the resurgence of Covid-19. Punjab reported the highest incidents of murder, rape, suicide, acid burning, kidnapping, domestic violence, child and forced marriages, dowry and inheritance, while Sindh had the most cases of honor killings,” it stated in a report titled "Violence against women and girls in the time of the Covid-19 pandemic."

“While it is unfair to compare the intensity and damage including psychological trauma caused by one form of violence with another, one cannot fail to observe with deep desolation, disbelief and discomfort that VAWG forms labeled as murder, honor killings and suicide actually lead to a lethal and irreversible outcome — loss of life.”

The report noted that 624 out of 2,297 reported cases fell under the categories of murder, suicide and honor killing, constituting nearly 30 percent of overall reported cases. "This statistic alone is sufficient to establish the misogynist mindset of society at large,” it stated.