Instead of changing the status of missionary institutes, the government should focus on increasing the education budget 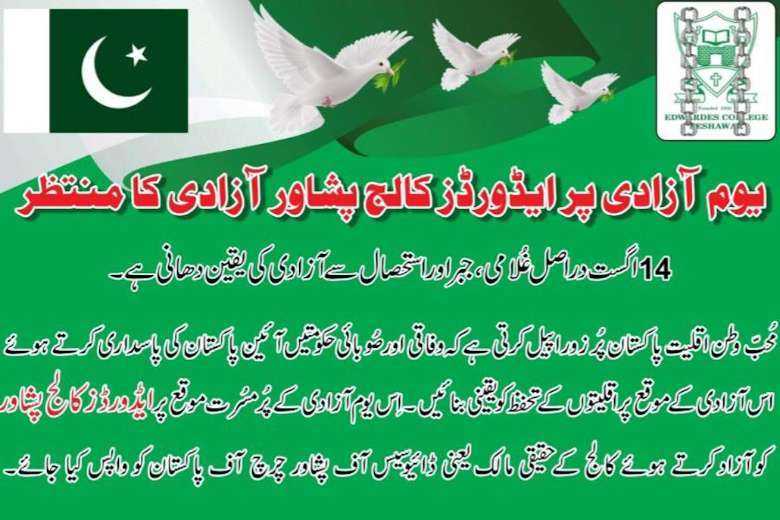 The Independence Day card issued by Peshawar Diocese of the Church of Pakistan.

As the whole of Pakistan wears a green and white look with colorful stalls to celebrate its 74th Independence Day on Aug. 14, the Christians of Khyber Pakhtunkhwa province have issued a somber greeting.

“The patriotic minorities of Pakistan strongly appeal to federal and provincial governments to abide by the constitution of Pakistan and ensure the security of minorities. On this joyful occasion, the college must be returned to its original owner, namely the Diocese of Peshawar of the Church of Pakistan.”

Church of Pakistan Bishop Humphrey Peters of Peshawar has been leading protests since the Supreme Court asked the church to hand over the management of Edwardes College, the oldest missionary education institution in the province, to the local government in June.

The Minorities Alliance Pakistan marked National Minorities Day on Aug. 11 with a public rally joined by hundreds in Islamabad.

As we near the platinum jubilee of our country, this public attitude hampers hope for a brighter tomorrow

“Are we not humans or citizens of this country? Where is the liberal and secular Pakistan as envisioned by our founding father, Muhammad Ali Jinnah. This country has been handed over to extremists and terrorists to kill us,” stated Catholic lawyer Akmal Bhatti, the main organizer.

Hindus, who constitute Pakistan’s largest non-Muslim minority and are estimated to comprise 2-4 percent of the population, are also celebrating a joyless Independence Day following a mob attack on Siddhi Vinayak temple in Punjab province this month.

As we near the platinum jubilee of our country, this public attitude hampers hope for a brighter tomorrow. Church activists correlate poverty with religious discrimination. After all, most victims of forced conversions are from poor families.

Archbishop Sebastian Shaw of Lahore suggests career building to counter the increasing violence against religious minorities.  Speaking at a confirmation Mass on Aug. 13, he urged youth to get higher education as well as professional skills.

“Despite a 5 percent job quota for religious minorities, 1,800 government jobs are still vacant because Christian youth isn’t educated enough. You are our asset. We are proud of you. The China-Pakistan Economic Corridor offers further opportunities,” he said.

“Send your CVs to your parish priests. We are starting a new batch of Central Superior Services (CSS) exams next month.”

Church academies run preparatory courses to help young men and women prepare for the CSS exams conducted annually to recruit people for top government positions. Catholic bishops initiated these academies in 2019 to uplift communities. Hats off to them.

According to current Chief Justice Gulzar Ahmed, such tragic and unfortunate incidents of desecration of holy places are neither tolerable nor acceptable in Pakistan. Addressing at a Minorities Day program, he called for a sense of tolerance and religious harmony in society.

Sadly, the same Supreme Court announced the nationalization of Edwardes College in a fresh blow to harmony. Social cohesion cannot be achieved without integrating those forgotten. Instead of changing the status of missionary institutes and usurping their resources, the government should focus on increasing the education budget and providing basic facilities to frustrated people trying to find a refuge in religion.

However, blaming fundamentalism is one side of the story. There is great room for improvement within our own systems. Despite seven decades of animation and community awareness, the Church has failed to provide alternative sources of livelihood for sanitary workers. Generations of Christians remain committed to sanitary work due to associated privileges, mainly accommodation.

A 17-year-old Christian youth of Lahore had to give up grade 11 studies and lift the broom following the sudden death of his father, a sanitary worker, this month. Building bigger church buildings won’t address their problems.

Jesus washed his disciples' feet just before the Passover festival. It was a way of life for all Christians, especially their leadership. I only see them carrying out this tradition once a year. Respect demands more than rituals. Change won’t come while the menus remain different for executives and commoners on church dining tables. It certainly won’t come by spending fortunes on welcoming bishops in parish programs.

Pope Francis has always stressed the need for the Catholic Church to become a church of the poor. The Christian population in Pakistan has declined over almost two decades, according to government data.

Trust can only be regained by substituting commercialism with service. For years I heard Caritas staff teaching communities to catch fish. We can’t give you the fish, they would say. It’s about time they handed over the lake to the people. Happy Independence Day!