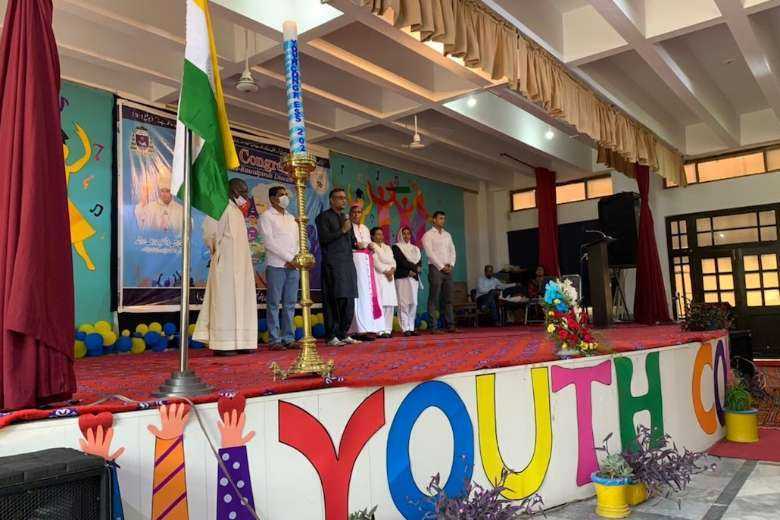 Father Sarfraz Simon is tired of Christian youths complaining of unemployment in Pakistan.

“We have schools for formal and technical education. The second Diocesan Cricket Tournament Final was held yesterday. Islamabad-Rawalpindi Diocese pioneered Central Superior Services (CSS) classes in 2019 but our youth has zero self-confidence for the most competitive exams,” Father Simon told an audience of more than 300 young people.

“Don’t complain about what the Church is doing for you. Stop depending on your parents or earning siblings. Make your career or else they [the majority] will keep killing you in the name of religion. Laws will be made against you. Don’t expect anything good from them. Record numbers of minority girls have been converted in three years of the ruling government. We don’t have basic rights in this country. Those who claim this are lying.

“We were formerly known as an English-speaking community. Every third Christian house has a liquor permit for both males and females. The Christian divorce rate has tripled. The literacy rate has dropped. Our community feels weaker, helpless, hopeless and humiliated. There is no healthy entertainment. The monster of frustration is slowly eating up our youth. The minority quota for government jobs goes redundant every year.”

The diocesan director of the National Commission for Justice and Peace in Islamabad-Rawalpindi Diocese was addressing an Oct. 1 session on “Constitution of Pakistan and the Christian community” at the five-day Diocesan Youth Congress that concluded on Oct. 3 at St. Mary’s Academy in Rawalpindi.

Christian youngsters from 23 parishes of the northern diocese attended lectures by professionals including Christian government officers on career guidance, entrepreneurship and peace building along with tableaus, reflections on Biblical parables and daily Masses. The event concluded with an exhibition by 15 companies who had stalls to guide participants.

It is a violation of our rights and will hurt our community. Already many are being left behind as bribes are charged for a job on the minority quota

Father Simon also spoke about the Supreme Court direction to the federal government and provincial chief secretaries to take prompt action on minority employment issues and submit a report.

The apex court on Sept. 28 expressed its concern over more than 30,000 vacant job slots for minorities in the government employment quota. The court remarked that it had been informed that the federal, Punjab, Khyber-Pakhtunkhwa and Balochistan governments were not recruiting minorities according to the quota.

In 2009, the national government allocated a 5 percent quota for minorities in government sector jobs. However, human rights organizations claim that most people from religious minorities are doing menial jobs and are hired as sanitary workers in the Muslim-majority nation.

Media reports claim both women and religious minorities are failing to fill their reserved quota in the CSS exams, resulting in a piling up of vacancies. In the last CSS exam, only one Christian woman managed to pass the exam. The vacant posts are carried forward to ensure their representation in the superior services as per their reserved quota. Out of the total vacant posts, 43 percent belong to minorities.

On Oct. 4, the National Assembly secretariat issued a notification about cancellation of the quota for minorities in Kashmir, federal capital Islamabad and two other provinces. All hiring on grade 15 and below will be done on merit in the secretariat, it stated.

Suneel Shehzad, president of the minority wing of the Pakistan Peoples Party in Lahore, condemned the move.

“It is a violation of our rights and will hurt our community. Already many are being left behind as bribes are charged for a job on the minority quota,” said Shehzad, a job consultant who has helped 15 Christians get government jobs since 2016.

“Our people need awareness that a letter from a parish and a copy of the notification of the minority quota can help in the recruitment process. We have scope in jobs from grade 5 to 10 including clerical and medical categories. Sadly, most Christians are recruited as sanitary workers and sweepers in grade 4.”

Sabir Michael, a human rights activist and professor at the University of Karachi, urged Catholic authorities to spread the word.

“Social organizations can help in guiding our youth right after they pass grade 10 or 12 exams. Sadly, church-run schools are losing the competition with other institutes. In Karachi Archdiocese, none of the Catholic schools are in the top 10 ranking. Untrained staff, nepotism and lack of transparency are hurting their image,” he told UCA News.