Humanity is being stripped away on the streets, leaving little hope for the rights and freedoms of its people 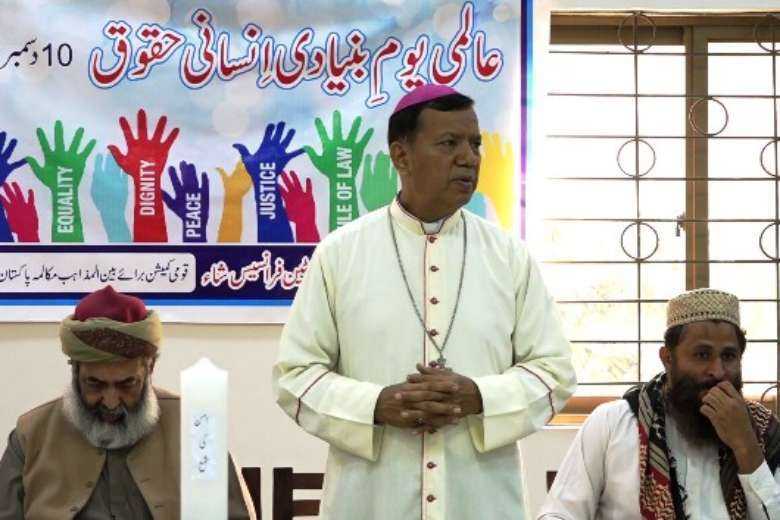 Archbishop Sebastian Shaw speaks at a function on the eve of Human Rights Day at the Sacred Heart Cathedral in Lahore, Pakistan, on Dec. 9. (Photo courtesy of Catholic TV)

It only takes the events of one week to summarize the situation of human rights in Pakistan.

“I went to speak and perform in Government College University Chiniot but I was not allowed on campus. I was told that intelligence agencies called Dr. Shahid Kamal (the vice-chancellor) and blocked my entry,” said Taimur Rahman, an associate professor at Lahore University of Management Sciences, in a Facebook post on Dec. 8.

“I have committed no crime. My only ‘crime’ is that I’m a progressive who stands on the side of the poor and downtrodden. Please share my video to express solidarity and record your protest against this inexplicable censorship of progressive thought,” he appealed to netizens in a post viewed by more than 3,000 people.

The same afternoon, videos of several women being assaulted, stripped and filmed in a market in Faisalabad, also in Punjab province, surfaced on social media. Their ordeal went on for an hour with none of the spectators attempting to intervene.

The incident comes amid 16 Days of Activism against Gender-Based Violence, an annual international campaign that kicks off on Nov. 25, the International Day for the Elimination of Violence against Women, and runs until Dec. 10, Human Rights Day.

Many netizens justified the action after the emergence of a new video showing the women stealing from a shop.

Trying civilians in military courts is akin to butchering the constitution. An extremely dangerous precedent has been set in the Idrees Khattak case

Humanity was stripped away on the roads of Faisalabad, often referred to as the little Manchester of Pakistan because of its rapid industrial growth and textile mills.

“Trying civilians in military courts is akin to butchering the constitution. An extremely dangerous precedent has been set in the Idrees Khattak case. Every citizen is vulnerable. You can be abducted for months, then tried before military courts with accusations of espionage and convicted without evidence being made public or you being given right to engage a lawyer of your choice and with no right to appeal before high courts,” said Jibran Nasir, a human rights activist.

However, the most disturbing news of the year was the gruesome killing of Priyantha Kumara, a Sri Lankan factory manager who was tortured and set on fire by a mob for alleged blasphemy in Sialkot, another export hub with the highest per capita income in the country. The roots of radicalization are much deeper in the poorer villages.

The lynching drew international condemnation with the world calling on Prime Minister Imran Khan to take strict action against the culprits.

However, the Catholic actor, director and civil servant Ashir Azeem, who migrated to Canada in 2018, doesn’t blame the members of the mob.

“Most of them are millennials claiming this to be Islam. They saw society honoring the murderers of alleged blasphemers. The children learned what they were shown. Is it their fault they took their elders seriously? Corrective action is needed but the poor are being punished for poverty, not murder,” he said in a YouTube video.

My hopes of seeing a peaceful Pakistan in my lifetime ended this April amid violent protests by the hardline Islamist party Tehreek-e-Labbaik (TLP) Pakistan to force the government to expel the French ambassador over the issue of blasphemous cartoons published in France. Eight policemen were killed in the ensuing violence.

One of the videos circulating on social media showed a man holding his newborn son while participating in the chaos. I can’t think of such commitment in any other religious community of Pakistan. TLP slogans will run in the blood of generations to come.

Pakistan will be referred to as a country of particular concern until radical groups like TLP continue claiming to be the kingmaker in the next general elections. Such is its popularity that a motorcycle mechanic near my house offers free repairs to TLP voters.

But a vote bank based on bloodbaths cannot ensure a progressive Pakistan.

Christian activists in Pakistan are observing Human Rights Day by organizing countrywide protests against the forced conversions of underage minority girls. A social media campaign urged missionary schools to close the institutions on Dec. 10 in protest against forced conversions, religious intolerance and extremism.

Archbishop Sebastian Shaw of Lahore led an interfaith rally at Sacred Heart Cathedral to commemorate the day the UN General Assembly adopted the Universal Declaration of Human Rights in 1948.

“We have been struggling to promote human dignity and respect in Pakistan for the past many years. We shall work harder to rehabilitate human rights and make this movement known in every street for peace in the whole country,” he said.

Last month the National Commission for Minorities accepted the resignation of Archbishop Shaw amid allegations about the commission’s inability to address the concerns of religious minorities such as Christians and Hindus.

The Catholic bishops' National Commission for Justice and Peace had been urging him to reject the “toothless body without proper legislation” since his appointment was announced in May 2020.

Even if we cannot confront the powerful, let us support those who do so.