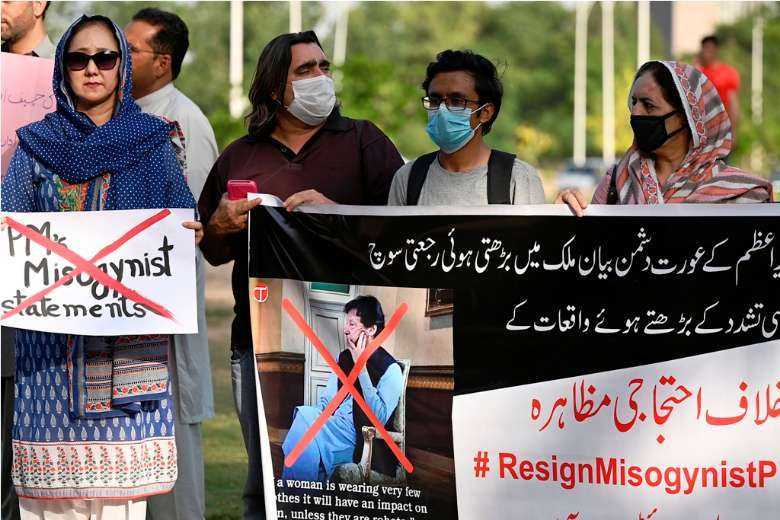 Activists demand an apology from Prime Minister Imran Khan during a protest in Islamabad on June 23 over his misogynist comments on women in Pakistan. (Photo: AFP)

The global civil society alliance cited the risks faced by human rights defenders, a systematic crackdown against the Pashtun movement, censorship of media and the shutting down of non-government organizations (NGOs) as matters of concern.

“The culture of impunity in the country has meant that perpetrators of these abuses have not been held accountable,” it said in an Aug. 16 media release urging Pakistan's government to take corrective steps.

Enforced disappearances targeting human rights defenders, political activists, students, journalists and others have continued relentlessly under the Khan administration. Many of those forcibly disappeared have been subjected to torture and death during detention.

CIVICUS highlighted the case of human rights defender Idris Khattak, who was forcibly disappeared from Khyber Pakhtunkhwa province in November 2019 and held in state custody. He is now facing prosecution in a military court.

Women human rights defender Gulalai Ismail was forced to leave the country in September 2019. She and her parents have been facing harassment for the last two years and are facing trumped-up terrorism charges.

The Pakistan government has arbitrarily arrested, detained and prosecuted scores of PTM activists on spurious charges including sedition and terrorism

The UN Committee on the Elimination of Discrimination against Women has raised concerns over female rights defenders being frequently subjected to reprisals, harassment and threats.

These documented violations are inconsistent with Pakistan's international obligations and the freedoms guaranteed under its constitution, CIVICUS maintained.

The government had committed to criminalizing enforced disappearances when it came to power in 2018. However, the bill to do so had been languishing at the draft stage for more than two years before it was finally introduced to the National Assembly in June 2021.

Meanwhile, a systematic crackdown has continued on the Pashtun Tahafuz Movement (PTM), which is fighting rights violations of the country’s largest ethnic minority.

Instead of addressing Pashtun people’s concerns, the Pakistan government has arbitrarily arrested, detained and prosecuted scores of PTM activists on spurious charges including sedition and terrorism, CIVICUS said. Some PTM activists have even been killed.

Authorities have attempted to suppress the movement, CIVICUS said while underlining the need to put an end to the harassment, stigmatization, intimidation, unlawful surveillance, travel restrictions and arrest of peaceful activists.

The global civil society alliance further called on Pakistan to “take urgent steps to ensure that all human rights defenders in Pakistan are able to carry out their legitimate activities without any hindrance and fear of reprisals in all circumstances and conform to the provisions of the UN Declaration on Human Rights Defenders.”

Press freedom in Pakistan continued to deteriorate under Khan’s leadership. Journalists have been criminalized and even abducted.

In 2019, several journalists were placed on a watch list by the Pakistan Federal Investigation Agency’s cybercrime wing over criticism of Saudi Crown Prince Mohammed Bin Salman during his visit to Pakistan.

In 2020, government officials and supporters mobilized a cyber-harassment campaign against women journalists and commentators whose views and reporting have been critical of the government and more specifically its handling of the coronavirus pandemic.

“Any forms of harassment and attacks against journalists must be promptly and impartially investigated immediately and perpetrators brought to justice,” CIVICUS demanded.

The other recommendations include fostering a safe and enabling environment for civil society, ensuring freedom of expression and media freedom, and making sure that journalists are able to work freely and without fear of retribution for expressing critical opinions or covering topics that the government may find sensitive.