Despite threat of a disease, impoverished laborers still flock to stone-crushing industry 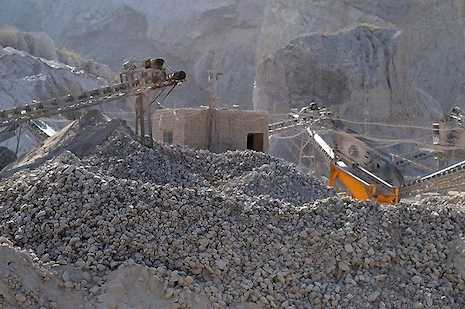 The village of Nut Kallar has lost nine of its residents to silicosis. All of them worked in the stone-crushing industry (Photo: Dawn.com / Irfan Haider)

By Nasir Jamal for Dawn.com

Abdullah Khushi Muhammad, 45, sits on a charpoy under a tree, stoically fighting silicosis, a life-threatening disease that has resulted from continuous exposure to silica dust during his eight years of work at stone-crushing factories. For as long as he lives he will have to cope with shortness of breath, a chronic cough, recurring fever and severe chest pain.

“My younger brother and two cousins died of this disease not long after they quit the,” says Abdullah. “I am getting weaker by the day.”

Abdullah’s village Nut Kallar, some 30 kilometers east of Gujranwala, has lost nine of its sons to silicosis. All worked in the stone-crushing industry, from six months to several years. Besides Abdullah, two others have the same disease. Nearby, Abdullah’s neighbor Yasmin Bibi struggles to make ends meet. Her husband, Allah Ditta, died almost a month before she gave birth to their only son, now age 12.

“He died six months after he returned home from working at one of these factories. We had to sell everything to pay for his treatment,” Yasmin recalls. “He suddenly lost a lot of weight and coughed endlessly. The doctors said he had contracted tuberculosis. His brothers also had similar symptoms. They too died.”

Allah Ditta, who was the first in the village to die of silicosis, may not have known that the cause of his illness was the dust at his workplace, but many others knew of the hazard. Still they didn’t quit their jobs.

“For the illiterate and unskilled it’s a very well-paid job,” says Mohammad Riaz, who has been diagnosed with silicosis. “A man working at a stone-crushing factory earns up to 20,000 rupees (about US$203) a month.”

A road snaking through the vast basmati fields takes you to Glotian Mor on Gujranwala-Sialkot Road, an hour’s drive from Nut Kallar. Ashraf Ansari shifted his small stone-crushing plant to this location a few years back. The relocation too place after many men who worked in his factory contracted silicosis and the news was reported in local media.

However, Ashraf denies that any of the dead worked for him. “I relocated the factory because the old one was suffering losses. We don’t use silica dust nor crush stone into [silica] powder,” he claims.