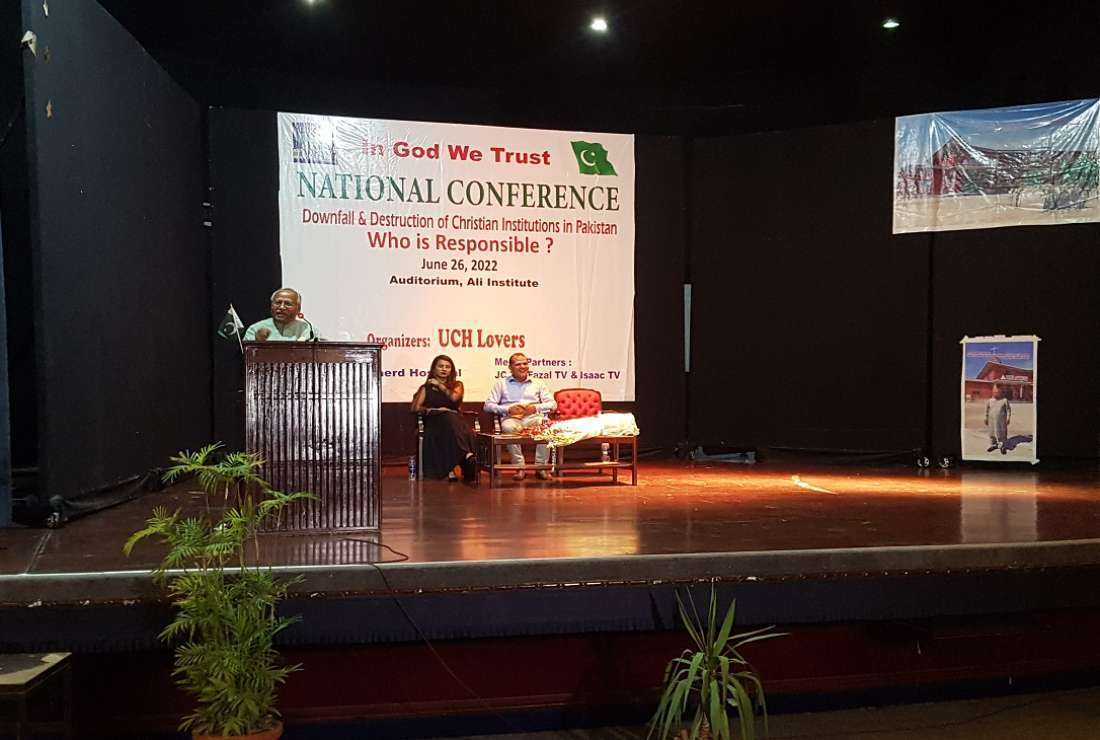 Dr. Felix Gill was fired last December for filing a lawsuit against the medical board of Christian Hospital Taxila in Pakistan's Punjab province.

In 2020, he spearheaded protests by nurses and hospital staff over unpaid wages at the facility in Taxila, 40 kilometers west of national capital Islamabad. The allegations included challenging the Presbyterian board for using the name of two deceased board members for registering hospital in a joint-stock company.

“My pension fund of about 2 million rupees (US$9,634) has been blocked. The staff are still waiting for two months’ salary. My termination is unlawful and based on vengeance. The administration is destroying a Christian institute and giving it to Muslims,” Gill told UCA News.

Gill is one of the three Christian eye specialists terminated last year for highlighting scandals of nepotism, corruption and maladministration at the hospital founded by the United Presbyterian Mission in 1922. All of them have been replaced by Muslim doctors.

Nepotism, corruption and maladministration at church-run hospitals like Christian Hospital Taxila were discussed at a national conference titled “Downfall and Destruction of Christian Institutions in Pakistan” in Lahore on June 26.

The event was organized by UCH Lovers, a volunteer organization trying to restore United Christian Hospital of Lahore, which was also rocked by decades of corruption, a red-light bar, encroachment and sale of its land and medical equipment.

"The downfall started with the formation of a local union in 1975. The ruins represent the situation of our faith. Muslims love our institutes but we don’t"

Since 2015, a part-time medical director has been overseeing operations at UCH, which introduced open-heart surgery in Pakistan.

“Presbyterian American missionaries left the hospital in the 1980s after being humiliated by local Christians who formed a parallel board. The downfall started with the formation of a local union in 1975. The ruins represent the situation of our faith. Muslims love our institutes but we don’t,” said Yousaf Benjamin, a Christian activist.

Benjamin was among several speakers who highlighted the challenges of divisions among denominations, corruption and property disputes at Christian institutes as well as shrinking spaces for educated Christian youth.

They urged the revival of spirituality, developing a second line of leaders, inclusion of retired judges and politicians on church boards of governance and competent professionals as administrators in church institutions.

Christian missionaries pioneered women’s health and education in Pakistan. According to the Catholic Church's directory, 504 educational institutes were functional until 2010. Only 355 are now running in seven dioceses. Seventy percent of Pakistani bureaucrats have studied in missionary schools, claims UCH Lovers.

Forman Christian College, founded in 1864 by an American Presbyterian missionary, is the only church-run chartered university in Pakistan.

Christian educationists blame the nationalization of Pakistan's private schools in 1972 for the low literacy level among the Christian community, weakened church institutions and creating fear among them. Nearly half of church-run schools and colleges are still under the control of provincial governments.

Years of litigation have turned several schools into ghost schools. These include Darul Hikmat (hall of wisdom) Education Centre in Lahore that was retrieved by the deputy commissioner of Lahore from its former legal adviser Noraiz Dilawaiz, a Christian, after three years.

“The board of directors are responsible for empowering Noraiz Dilawaiz. Church authorities should have focused on court battles instead of involving government officials,” he told UCA News.

“The FTL nuns were running the hospital, so the diocese could not employ the doctor. The congregation has sent three nuns but I think the task was and is beyond their ability"

Christian activists have been protesting against the disposal of church properties, demanding the arrest of their facilitators and condemning the land mafia. They blame board members for protecting the corruption of their relatives and selling missionary properties.

Churches in three other provinces require a no-objection certificate (NOC) from provincial ministries of minorities affairs and interfaith harmony for the sale, transfer, purchase and gifting of their properties.

Meanwhile most of the 50 church-run hospitals in the country remain outdated.

“The management was handed over to Franciscan Tertiary Sisters of Lahore (FTL), who employed a Christian doctor graduated from Russia. He did not do his Pakistani training counterpart. The government checked on that official and asked us to employ a full-fledged doctor,” Father Bonnie Mendes, former regional coordinator for Caritas Asia, told UCA News.

“The FTL nuns were running the hospital, so the diocese could not employ the doctor. The congregation has sent three nuns but I think the task was and is beyond their ability.”

According to Suleman Bhatti, president of the youth wing of UCH Lovers, none of the websites of missionary hospitals are updated.

“They are managed like clinics. None of them have been raised to universities. Pastors dominate boards only headed by a bishop,” he said.

“The conference is a wake-up call for the community and an effort to start a movement to restore the lost glory of our institutes. The proposed recommendations will be shared with churches for implementation. The future of our younger generations depends on it.”