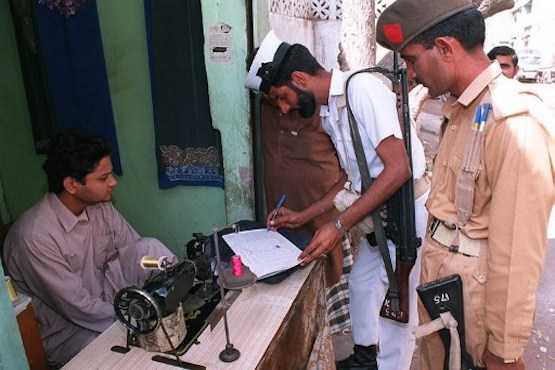 Two military men collect information from a tailor in Karachi as part of a census in this file photo. (Photo by AFP)

As the Pakistani government prepares for the long awaited population census, Christian human rights activists are lobbying for dependable data about religious and other minorities.

"Enumerators' training should include special instructions, sensitizing them about importance of religious minorities and recording their correct and complete particulars," he said.

Jacob was speaking at an Aug. 4 seminar in which speakers discussed the challenge of holding the first credible population census in 17 years. The government of Pakistan has stated that the census will be conducted after March 2017.

Several speakers also urged for the need to identify transgender people and persons with disabilities in the upcoming census. Raza Ali, a researcher, expressed his reservations about the "religion" column in the questionnaire used in 1998 census.

"There was no method to count the Ahmadis [a sect considered heretical by mainstream Muslims] who consider themselves Muslims," he said. "The question of identifying faith in census is complicated."

Politicians belonging to minority religious groups such as Christians, Hindus and Sikhs have long been demanding an increase in their seats in the National Assembly of Pakistan and provincial assemblies proportional to their numbers in the population. In 2008, the national parliament increased from 210 to 342 seats but the reserved seats for minorities stood still at 10. There is currently a 5 percent employment quota for minorities in federal jobs, educational institutions and government schemes.

According to Cecil Shane Chaudhry, executive director of the Catholic bishop's National Commission for Justice and Peace (NCJP), the census could be a big step towards mainstreaming minority communities.

"Credible data and a true classification of religion is of paramount importance for the development of non-Muslim Pakistanis," he said. "But this does not seem to be important in the national agenda [and] we only have inaccurate estimates of those who have migrated and sought asylum in other countries."

Before the separation of East Pakistan (present-day Bangladesh) in 1971, Pakistan had 77 percent Muslims and 23 percent religious minorities. The 1998 census found 96 percent of the total population was Muslim. NCJP also held a self census in three sub-districts of Punjab that same year.

"The parallel exercise revealed gaps in enumeration in remote areas [so] now we focus on filling these gaps," said Peter Jacob former executive secretary of the commission. "The struggle of minorities' rights, their social status and religious freedom is linked with the headcount. Diverse communities must express their concerns."

Kashif Kamal, Director of Helpline Ministry of Human Rights, blames forced conversions of Hindu girls in Sindh province and the persecution of Ahmadis and Christians for the decrease in minorities' population.

"The sense of under-representation of different social, religious and cultural groups causes resentment which has repercussions on peace and progress in all respects, besides the ramifications in social, physical and economic planning," he said quoting a position paper released at the seminar.

Christians leaders have long maintained that a proper enumeration of religious minorities in the census is required so that the legitimate interests of the minorities are constitutionally provided for and not remain subservient to the majority's goodwill.