A Christian groom presents a wedding ring to his bride during a mass marriage ceremony in Lahore. The Supreme Court has ordered the registration of marriages of the minority Christian community in Punjab province. (Photo by AFP)

Pakistan's top court has ordered the registration of marriages of the minority Christian community in Punjab, the country's most populous province.

The 17-page order by the Supreme Court came in response to a petition filed by Pastor Shahid P. Meraj, dean of the Anglican Cathedral Church of the Resurrection in Lahore.

The petitioner said the community was facing problems in registering Christian marriages with the union councils of Punjab and the National Database and Registration Authority.

The matter was brought to the court's attention during a hearing of a case involving the September 2013 bombing of a Catholic church in Peshawar.

At least 127 Christian worshippers were killed and scores were killed in a twin suicide attack at All Saints Church in one of the deadliest terrorist attacks on the minority community.

Days after the carnage, Pakistan's top court said it would hear grievances of religious minorities living in the Islamic republic.

In an order given on Jan. 16, a three-member bench, headed by Chief Justice Saqib Nisar and comprising Justice Faisal Arab and Justice Ijazul Ahsan, directed the Punjab government to take steps to ensure the registration of Christian marriages.

The court noted that the local government statutes of the provinces of Sindh, Khyber-Pakhtunkhwa and Balochistan all contain similar provisions.

It said that the constitution states that citizens are equal before the law and are entitled to equal protection of the law, so it is discriminatory that Punjab, where about 80 percent of Pakistan's Christian population resides, should refuse to do so. 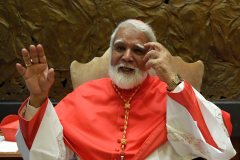 Growing up Catholic in Islamic Pakistan "This has come after a long legal battle. Our community has been struggling to register marriages at union council level," convener Amjad Naimat told ucanews.com.

"The detailed order will force authorities in Punjab to act swiftly and make necessary changes to the law.

"We deserve equal rights as guaranteed by the constitution of Pakistan. There should be no discrimination regarding registration of marriages for Muslims or non-Muslims."