“The water level has increased in our areas. More than 100 families are living in about three to four feet of water that has reached their homes,” Father Kashif Jamil said in a video message circulated on Christian WhatsApp groups and posted on Caritas Pakistan’s website on Sept. 10.

“This water surge has caused huge damage and our people are very much affected by the disaster. In this hour of calamity, we invite you all to help so that we can rebuild the lives of our people and support them.”

Father Jamil, parish priest of St. Joseph Church, recorded the video on a flooded road of Khushab District of Punjab province where over 10 villages have been flooded.

Oblate Father Ataa Sultan, parish priest of Derekabad in Thal Desert, located between the Indus and Jehlum rivers, transported villagers to hospital during torrential rain on Aug. 31. Nine-year-old Seher Masih was among three injured when the roof of his mud house collapsed at night.

“He was sleeping on a charpoy [wooden bed] and buried under straw, mud and wooden beams. My son-in-law received three stitches but the boy had minor injuries on his head and neck,” Seher’s mother told UCA News, thanking the priest for his timely rescue.

Father Sultan joined Bishop Benny Travas of Multan and the diocesan Caritas team to distribute 15 tents and 75 ration packets among residents of desert parishes on Sept. 8.

“We are focusing on sandy areas where all mud houses have been damaged. The farmers were already struggling with one crop a year [in winter] and a shortage of drinking water. Brick kilns have closed due to heavy rains, further affecting the daily wages of laborers,” he told UCA News. 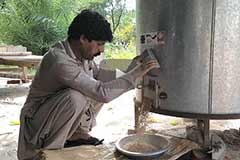