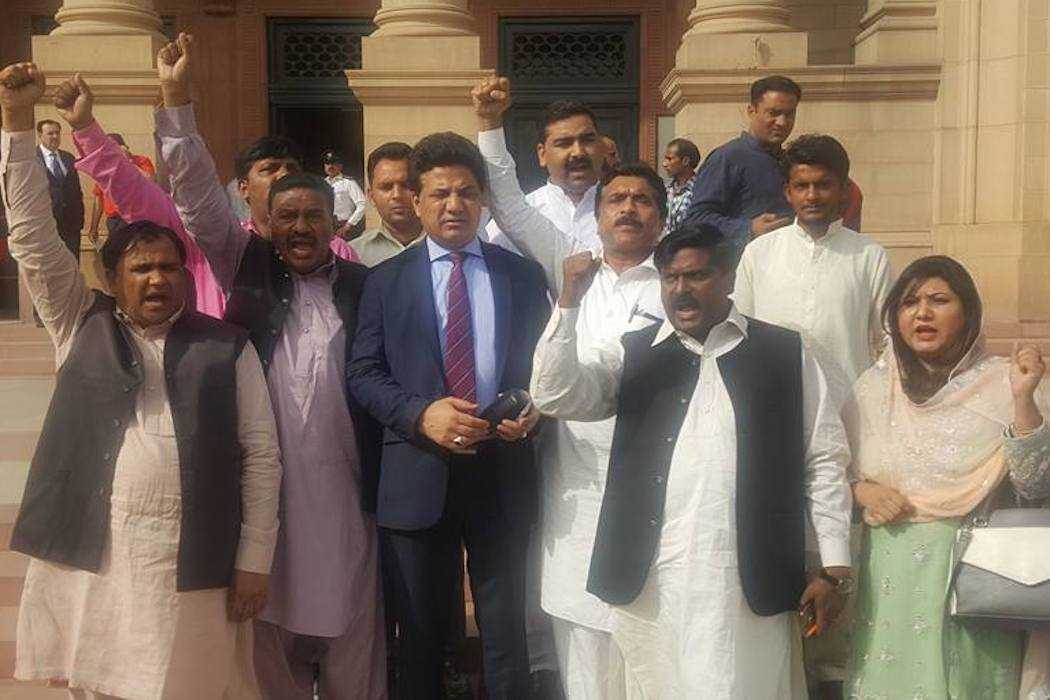 Minority members of the Punjab Assembly protest comments by Muslim lawmaker Arif Abbasi on May 17. (Photo by Khalid Shehzad)

Minority members of the Punjab Assembly are condemning a Muslim lawmaker for making anti-Christian remarks.

"Suspend Arif Abbasi!" shouted Sikh and Christian lawmakers outside the assembly, where they held an emergency press conference to discuss a member of the Tehreek-e-Insaf party headed by former cricket star Imran Khan.

"During a heated discussion of the budget, Abbasi called me churha (low caste). This is an insult to all religious minorities in Pakistan. His leader is also prejudiced. We only accept a Pakistan where there is no discrimination of color, cast or faith," said Tariq Gill, the Christian parliamentary secretary for human rights and minorities.

The remarks were followed by a physical clash between treasury and opposition legislators on May 17.

Churha is a racial and abusive term reserved for Christian sanitation workers. Government advertisements usually announce sweeper jobs only for Christians, Hindus and Shia Muslims in Pakistan. Minority Hindus in Sindh province and Christians in other provinces are associated with cleaning toilets and drains.

Abbasi made a video statement to deny making anti-Christian comments.

"I only said 'Do not chur chur, respect my leader.' My comment was in response to insulting remarks but now it is being misquoted," he said. "I did not use any word against parliamentary etiquette. This is propaganda to distance a community from us."

"#I am churha" was trending on social media as Christian community leaders posted mixed reactions to the incident.

"The use of a derogatory term on the floor of the assembly is unethical. Minority lawmakers should have submitted their resignation from the assembly, which will complete its term this month anyway," Khalid Shehzad, a Catholic human rights activist, told ucanews.com.

"We are still not being accepted as equal citizens. The insecurity increases as our leaders themselves become faith victims. The comment from a leader reflects the dominant mindset of society"

Yousaf Benjamin, executive director of Dignity First, an NGO for persecuted Christians, said the dispute was a petty matter.

"I wish our representatives had raised such an outcry for recent victims of blasphemy laws and acid attacks. I guess they feel more pain when attacked personally," he said.