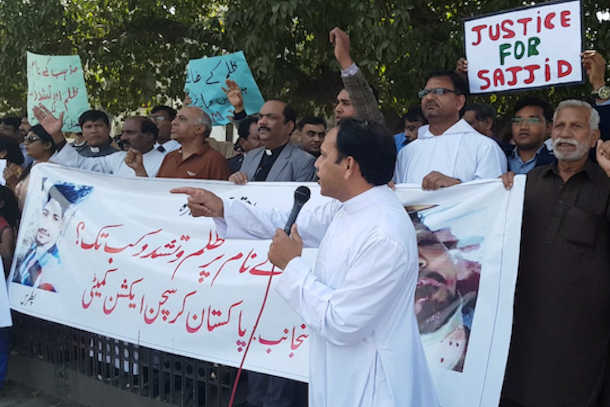 A politician from Pakistan’s ruling party has filed a blasphemy complaint against a former foreign minister for saying all religions are equal.

Qamar Riaz, a local leader of the Pakistan Tehreek-e-Insaf (PTI) party in Narowal, in Pakistan’s Punjab province filed the complaint in a local police station following remarks by former foreign minister and opposition leader Khawaja Asif about religion in the National Assembly.

“He stated none of the world’s religions world takes precedence over another. Islam and all religions are equal. His words are totally against the Quran and Sunnah [life of the Prophet Muhammad] and are therefore an insult to Islam,” Riaz said.

“As per the spirit of Shariah, this is a serious crime. The whole Islamic world has been insulted.”

Police have yet to register a blasphemy case.

Asif’s remarks were aimed at a group of lawmakers in the national parliament for opposing the construction of a Hindu temple in Islamabad.

Asif had also referred to a namaz (a prayer) he offered during Eid at a church in New York City and lamented how even the thought of such a thing happening in Pakistan was implausible.

Asif took to Twitter on July 14 to respond to those who criticized his comments.

“My speech was in the context of the 1973 Constitution of Pakistan that indiscriminately guarantees basic constitutional rights to followers of all religions. Due to a misunderstanding or political reasons, my people have given a wrong meaning to the context of my speech,” he said.

“Minorities are also our voters and as an elected representative, it is my duty to represent the voters. My faith orders me to ensure the protection of the rights of all citizens without discrimination and raise my voice against injustice.”

In a July 13 tweet, it urged Pakistan to conduct an expedited review of all blasphemy cases.

“It is a clear bid to try to silence a political opponent by misusing the blasphemy law. Shameful,” said Taimur Rehman, a political science professor at Lahore University of Management Sciences.

Blasphemy is a hugely sensitive issue in Pakistan, where even unproven allegations of insulting Islam can lead to assassinations and lynchings. According to observers, most blasphemy cases involve Muslims in Pakistan, but many also target people from minority religions.