Confirmed polio cases jumped from 58 in 2012 to 306 in 2014, coinciding with increased attacks on polio workers 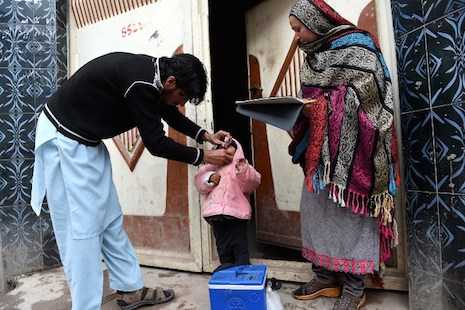 Polio vaccinators across Pakistan are facing increasing resistance and threats as they seek to prevent a growing caseload of sick children.

This week, as part of a campaign targeting 27.7 million children across Pakistan, authorities arrested 470 parents in the Peshawar region for refusing to allow their children to be vaccinated.

The number of confirmed polio cases has grown from 58 in 2012 to 306 in 2014, coinciding with increasing attacks on polio workers. At least 79 vaccinators or security staff working to protect them have been killed since 2012.

Women are frequently targeted, with hard line clerics criticizing their presence in the field, arguing they should be at home.

“My parents want me to quit. They say it’s too dangerous,” said Saadia Bibi, a vaccinator on the outskirts of Peshawar, the capital of the north-western Khyber Pakhtunkhwa province. “[But] I know what damage polio can cause, and also that only women vaccinators will be permitted to enter homes and reach the women and children in our highly conservative culture.”

Entire tracts of the country have been off limits to polio workers as militant groups have threatened anti-polio workers. These include the tribal territory of Waziristan, located along the Pakistan-Afghan border.

“The problem is that these militant groups are using polio in their fight against the government,” said Dr Rana Muhammad Safdar, national emergency coordinator for polio eradication. He said the militants deliberately spread rumors to make vaccination more difficult.

They have to a significant extent succeeded. “We do not trust these people. Their medicines could harm the children and make them sterile. This is what we have been told,” said Rehmatullah Farid, a father of four, in Peshawar. He said he had been “forced” to vaccinate his children this time.

The refusals by parents are just one manifestation of the hostility to the anti-polio vaccine.

The problem has been aggravated since the case of Dr Shakil Afridi.

Afridi, a physician employed by the Pakistan government, was jailed in 2012 for 33 years by a tribal court on charges of treason for assisting the US in collecting the DNA evidence that led to the capture in 2011 of Al-Qaeda founder Osama Bin Laden.

He had allegedly led a fake vaccination drive in order to enter the compound where Bin Laden was based. According to reports, the US continues to press for Afridi’s release.

Since the case, hostility towards polio teams has grown. “The suspicions that we were carrying out this campaign because the West wanted it, and not because it benefitted us, grew because of the Shakil Afridi affair,” said Safdar, who also attributed attacks on polio teams to this.

The attacks are continuing, despite campaigns run by the government to persuade people that vaccination against polio is essential to keep their children safe. Six persons have been killed so far in four attacks in 2015, according to official data.

Efforts by the government to expand polio coverage have meanwhile been stepped up, with a meeting of experts held in February emphasizing the need to strengthen coverage during the winter ‘low season’ when there is reduced risk of the virus being transmitted.

A detailed plan for this was designed at the end of 2014, as the scale of Pakistan’s polio concerns became clear.

From June 2012 to July 2014, a military operation against Taliban insurgents effectively cut off tribal areas including Waziristan as the militants imposed bans. During this period even some of those seeking the vaccine were denied it.

Mehran Khan was among those affected. Originally from South Waziristan, he now lives in Peshawar with his family — which includes a three year-old daughter unable to walk after she contracted polio two years ago. “I think often about her future and how she will manage,” said Mehran. He said he wanted her and her younger brother vaccinated, but “there was no way to get the drops since the militants stopped health teams”.

People moving out of tribal areas are also being targeted under the latest campaigns, as Pakistan continues to battle a disease that threatens its children and its health workers.