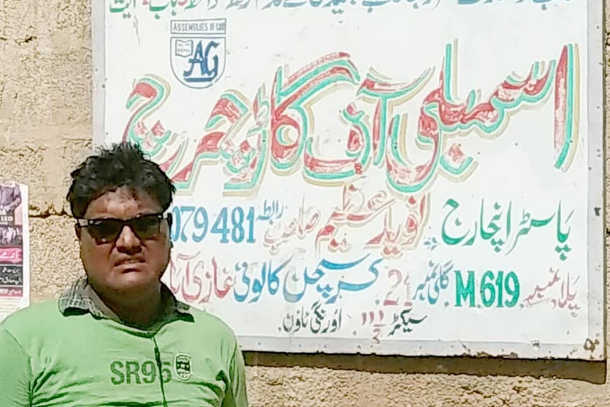 Pastor Naveed Azeem received a letter warning him to pay more than US$3,500 or his church would be subjected to a terrorist attack. (Photo supplied)

A Christian pastor says he received a letter warning him to pay more than US$3,500 or face a terrorist attack in the southern Pakistani port city of Karachi.

On May 1 he found an envelope near a shoe rack at his church containing a hand written Urdu language note asking him to pay the money within 10 days or "dig up 50 graves".

The note also warned that if he went to the police there would be consequences like that of the recent Sri Lanka terrorist attacks on churches and hotels that claimed more than 250 lives.

The pastor said that after consulting church leaders and local elders he registered a complaint with the police.

Father Anthony Abraz, a Catholic priest of the Good Shepherd Parish, called for federal and provincial authorities to take notice of the threat.

"Given what happened in Sri Lanka, it is terrifying not only for the pastor but for the entire community and those who attend the prayer service at the church," Faher Abraz said.

"There is a growing sense of insecurity among the already marginalized minorities, but we have to trust our government and law enforcement agencies."

Nasir Raza, a Muslim peace activist, said it was unfortunate that minorities were subjected to intimidation and threats.

"We demand that police apprehend people who might by using the Sri Lanka attacks to terrorize and exploit our Christians brothers here," he said.