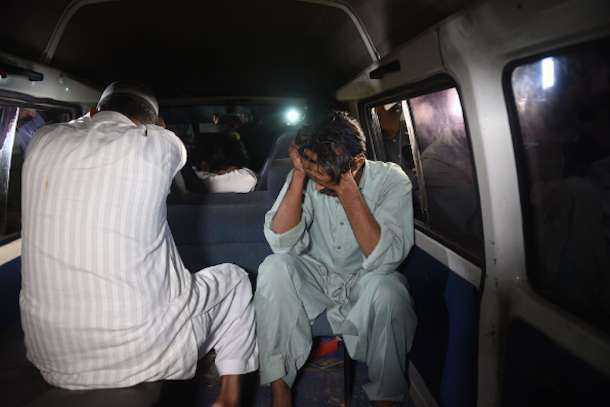 Relatives cover their faces as they arrive at Kot Lakhpat jail in Lahore in October 2018 to receive the body of Imran Ali, who was hanged after being convicted of raping and murdering Zainab Ansari. (Photo: AFP)

Child rights activists and Shia leaders have rejected a proposed a law on chemical castration of rapists in Pakistan.

“The punishments of making a male impotent and long imprisonment on sexual crimes are against Islam,” Hafiz Riaz Hussain Najafi, president of Wifaqul Madaris al-Shia Pakistan, said in a Nov. 27 statement.

“The Quran clearly orders that fornicators should be publicly lashed 100 times, rapists should be flogged 200 times, adulterers should be stoned to death. The punishments recommended in proposed ordinance by the government are equivalent to pleasing the West and accepting them as divinity.”

Prime Minister Imran Khan last week approved in principle a law on chemical castration of rapists. The decision was made during a cabinet meeting wherein the law ministry presented a draft of the anti-rape ordinance that included fast-tracking rape cases and witness protection. The law will soon be presented before parliament.

“Conviction is required before implementation of the punishment. We need to strengthen the systems like police investigation, medical process and judiciary. Our problem is not of punishment but of conviction. At least 97 percent of rape accused in the country never get convicted because of the flaws in the system,” she told UCA News.

“Brutal punishment is more about enthusiasm for revenge than belief in justice. Inappropriate punishments can't make societies peaceful and humanistic. We want rule of law, fair trials and safety. To improve reporting and investigation, the trial system is the solution. There must be an offenders' registry at government level.”

Debate around rape laws in Pakistan resumed following the gang rape of a 30-year-old woman in front of her two children on a motorway after her car ran out of petrol on Sept. 9.

In 2018, the Catholic Church in Pakistan strongly criticized police and officials for failing to make any arrests over the rape and murder of 7-year-old Zainab Ansari. Zainab’s body was found in a rubbish dump four days after she went missing in Kasur district of Punjab province. Both cases sparked a national outcry.