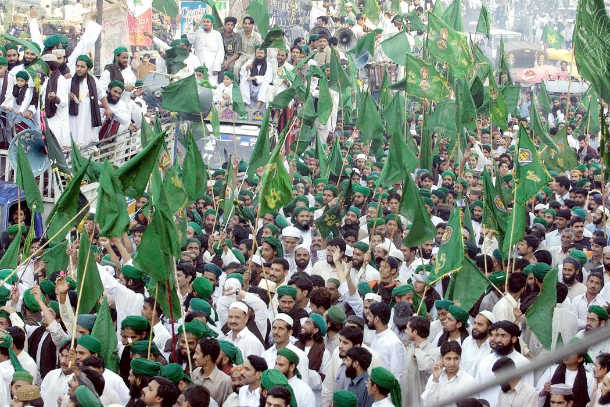 Pakistani Muslims belonging to Dawat-e-Islami take part in a religious procession in Lahore in this file photo. (Photo: AFP)

A cleric of Madani Channel broke the news of one conversion at the Faizan-e-Madina head office of Dawat-e-Islami in Karachi. A clip shared on Facebook has been viewed more than 500 times.

“Here is good news for you. I just received a message from Faizan-e-Madina where a welfare program is being run. Moments ago a non-Muslim came for rations. They become Muslims after reciting Kalma [the Islamic proclamation of faith],” he said.

“He was named Muhammad Ramzan. He already had sehri [pre-dawn meal in Ramadan] and will observe his first fast. We are trying to make worshipers while delivering food and knowledge of faith at home. Remember us in your donations.”

“Please don’t hurt the religious sentiments of the needy. We appreciate those who serve humanity without any motives. Love and respect humanity. Non-Muslim countries are helping us without the demand of conversion of religion,” Paul said in a statement.

Chaman Lal, a Hindu activist, shared the video on his Facebook page.

“They gave food and already made a new Muslim. What a splendid service. I ask friends in the Muslim community if it is rational to convert a hungry person in exchange for food. Even Islam does not preach this. The poor are being brainwashed by Islamic brothers. Faith should not matter amid the present pandemic,” he posted.

“Nothing is wrong in the video. But the statements given by you Lala [big brother] are wrong. You are promoting negativity. Seriously, it totally disappointed me. How could you write such type of content?” he asked.

Charity group Saylani Welfari has already faced accusations that Christian and Hindu families are being excluded from its door-to-door food distributions.

More than 100 Christian families from Punjab’s Kasur district were reportedly excluded from food aid distributed by a village committee comprising Muslims. In another incident, Christians were denied food in a village near Lahore.