Bishop Indrias Rehmat of Faisalabad with pilgrims at St. Thomas’ Sirkap archeological site in the city of Taxila in Punjab province on July 3. (Photo: Victor John)

Every year Victor John puts up banners inviting pilgrims to the feast of St. Thomas at the archeological site of Sirkap in Pakistan's Punjab province.

“Pilgrims will be provided breakfast and lunch. We welcome you from the bottom of our hearts,” states the banner in churches of 11 parishes in Faisalabad Diocese.

John’s family has been organizing pilgrimages from July 1-3 for almost three decades, a tradition his father started on the recommendation of a priest.

“On his wedding day in 1972, the late Father Allah Rakha noted that his birthday coincided with the feast of St. Thomas on July 3. Since then he used to invite relatives and friends to celebrate the feast,” said John, who observed the first death anniversary of his father at Sikrap last year.

“In 1981, he accompanied Father Rakha to collect stones from Sirkap to lay the foundations of St. Thomas the Apostle Minor Seminary in Faisalabad. The visit inspired him to begin family pilgrimages which morphed into an annual fair [mela] in 1992.”

On July 1, Bishop Indrias Rehmat of Faisalabad celebrated a preparatory Mass for the pilgrims at Syedabad Parish in Faisalabad. Children performed a tableau on the life of St. Thomas.

We shall follow the steps of St. Thomas in becoming true missionaries

Thousands of Catholic pilgrims took part in the three-day pilgrimage at the site where the apostle preached. John, who runs a printing press, offered tea and other beverages to more than 400 parishioners from Faisalabad on July 3.

“We are leading a convoy of 10 vehicles to the site. We hope it will bring lots of blessings to our church and the parish. We shall follow the steps of St. Thomas in becoming true missionaries. The Mass will be followed by a picnic to the archeological site,” said Father Bernard Emmanuel, parish priest of St. Mark's Parish in Gujranwala in a live streaming on Facebook.

Bishop Rehmat also led to a convoy of seven buses and celebrated Mass at the three-feet-high throne believed to be constructed by St. Thomas himself. The parishioners were charged 1,500 rupees (US$9.50) for the trip. He also accompanied the group visiting Sirkap, the 2nd-century ruins in Taxila which belong to four different periods — Pre-Greek, Greek, Scythian and Parthian.

The parish priest of Taxila greeted his group with a relic of St. Thomas. Bishop Rehmat blessed the faithful with the relic and remembered organizing the first three-day prayer program in 1993. Pilgrimage to where St. Thomas preached in India 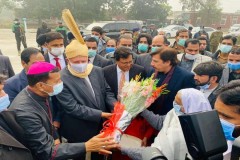 “The message of St. Thomas is echoed in our psalms. It’s not a fable; I saw coins of Taxila in a British museum. It is our mission to be brave and evangelize in difficult circumstances like the apostles. The trend of pilgrimage is slowly picking up thanks to my students who are now serving in different parishes,” said Bishop Rehmat in his homily.

“There was a deep joy and a spiritual bliss. The bishop sat and ate with the faithful like the apostles and shared stories of Jesus with them. The testimony of John and his family continues to inspire us,” she said.

According to tradition, St. Thomas passed through Taxila on his way to India and preached at the court of King Gondophares around AD 52. An early 3rd-century Syriac work known as the Acts of Thomas, discovered in 1822 in Syria, says the king gave some money to the saint and ordered him to build a royal palace.

St. Thomas, however, gave all of the money in alms and when the king discovered his disobedience, he ordered that the saint be burned alive. While the saint was in jail, the king’s brother Gad died and then miraculously came back to life. He recounted that in heaven he had seen a palace built for Gondophares by St. Thomas. The king pardoned the saint and converted to Christianity along with the people of the capital.

Thomas then proceeded to southern India where, according to another tradition, he preached the Gospel.

Sirkap is protected under the Antiquities Act 1975, passed by parliament, and listed as a UNESCO World Heritage Site.

In 2019, Punjab’s Minister for Human Rights and Minority Affairs Ejaz Alam Augustine announced the construction of a chapel and park at Sirkap. A Catholic church is being constructed in Taxila.

John, a father of two sons, lamented the lack of facilities.

“There are no shops or water taps in a five-kilometer radius of jungle and ruins. We also wanted to pay for tents to beat the sun but the provincial Archeology Department didn’t allow us. The church is distant from the throne of St. Thomas. A simple shed could have facilitated the pilgrims,” he said.