A policeman closes the gate of the District Jail during a gang rape case hearing, in Lahore on March 20, 2021. (Photo: Arif ALI / AFP)

Christian human rights groups in Pakistan are urging local courts to reject Sharia punishments for the blasphemy accused in the Muslim majority country.

Last week, a Peshawar High Court bench issued notices to the attorney general for Pakistan and provincial advocate general over a petition seeking orders for the government to remove the option of punishment other than the death penalty for blasphemy from the Pakistan Penal Code.

The Centre for Legal Aid Assistance and Settlement (CLAAS) UK, a Christian charity dedicated to helping persecuted Christians in Pakistan, rejected the death penalty for blasphemy in a March 25 press release.

“It’s time to stop the misuse of the blasphemy law. We see every day how this law is being misused by individuals and religious groups to achieve their goals and settle their personal grudges, especially against religious minorities,” said Nasir Saeed, director of CLAAS.

“Several governments have pledged to stop its misuse, and even recommended 10 years imprisonment for a false accusation, but nothing has changed. Instead, voices against the misuse of the blasphemy law have been forced into silence.”

“Clearly the judges are prejudiced. We are experiencing such attitudes from the beginning,” he said. “Instead of being driven by emotions, they should go by the book. We demand overall reforms in judicial system,” he told UCA News.

In July 2013, a trial court sentenced Gill, from Gojra town in Punjab province to life imprisonment for sending a controversial text message to a Muslim man in December 2011. The verdict included a fine of 314,500 rupees (US$2,000). He had been arrested by police who traced his mobile phone number through a cellphone tower. 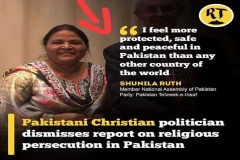 Section 295-C of the Pakistan Penal Code (PPC) relating to blasphemy laws envisages death or imprisonment for life as the maximum punishment for insulting the Prophet Muhammad. Rights activists say laws have been used against the followers of other religions and minority Muslims such as Shias.

Human rights lawyer Nadeem Anthony rejected amendments in PPC. “We support the law of the land. We are against death as punishment. This is inhuman and against the right to life,” he said.

In 1992, Christian Punjabi poet and teacher Naimat Ahmar became the first victim of extrajudicial killing for blasphemy after being accused of pasting posters on a wall that were derogatory towards Prophet Mohammad.