Justice Project Pakistan has launched a public campaign to bring back the country's moratorium on the death penalty which was lifted in December 2014 following a terrorist attack on a military-run school. (ucanews.com photo)

A Pakistani high court has suspended a state government order to cancel the registration of a prominent human rights group which provides free legal aid to death-row prisoners.

Justice Project Pakistan (JPP), a non-profit legal rights organization, was de-registered by the Punjab government which said its activities were outside the scope of its memorandum.

Calling the government’s order unlawful, the JPP filed a petition in the Lahore High Court, saying the orders were passed in violation of its right to due process of natural justice.

Pakistan lifted a six-year moratorium on the death penalty in December 2014 after the Taliban assaulted a military-run school in the north-western region. At least 150 people, mostly students and teachers, were killed in the terrorist attack.

The moratorium on the death penalty for all capital crimes was lifted in March 2015, leading to a dramatic rise in state executions.

According to data released by the JPP, 477 people have been executed in Pakistan since December 2014, with only 16 percent of the cases relating to terrorism.

The JPP has launched a week-long campaign to bring back the moratorium on the death penalty ahead of  World Day Against the Death Penalty which falls on Oct. 10.

The campaign seeks to highlight how Pakistan’s death penalty disproportionately and systematically targets its poorest and most vulnerable citizens.

The JPP said its aim was to educate the public on flaws in the Pakistani criminal justice system, such as denial of  proper legal representation and the right to a fair trial. 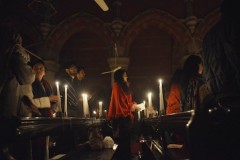 "Unless we mobilize public support for reform in our criminal justice system, many are going to continue to slip through the cracks," said Sarah Belal, JPP Executive Director.

Bishop Joseph Arshad of Faisalabad, who facilitated the release of more than 100 Christian and Muslim prisoners last year, extended his support for JPP.

"Restoring the human dignity of prisoners is a noble work, the government should support such groups. We are against the death penalty and appeal for justice for inmates."

Cecil Shane Chaudhry, executive director of the National Commission for Justice and Peace under the Catholic Bishop's Conference, said "hostile state measures" are affecting the good work of organizations, despite decades of work in the country.

"Various NGOs had to acquire fresh no-objection certificates which are extremely tough to get owing to demands for decades-old NGO records and complete information on all employees. Those who failed to meet the stringent criteria found their licenses were revoked," he said.

Chaudhry added that scrutiny should have been across the board. "Many sectarian groups are producing hate material but they are not questioned," he said. "Restrictions on donors are starving civil society. Even we cannot run programs in Punjab."