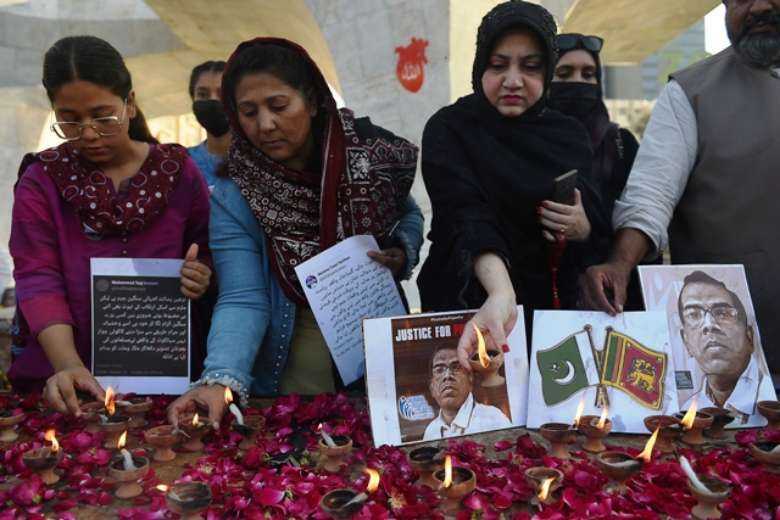 Members of the Human Rights Council of Pakistan pay tribute to Sri Lankan factory manager Priyantha Kumara Diyawadanage, who was killed by a mob after being accused of blasphemy, in Karachi on Dec. 5, 2021. (Photo: AFP)

Minority leaders have lauded the state-run council of clerics advising the Pakistan government on religious issues for proclaiming mob violence over blasphemy contrary to Sharia or Islamic canonical law.

In a Feb. 23 statement, the Council of Islamic Ideology declared that “subjecting any person to violence on allegations of dishonoring religion, desecration of the Holy Quran and Namoos-i-Risalat (sanctity of prophethood) was against Sharia, inhumane and contrary to Islamic principles.”

The council condemned recent incidents of vigilante killings and suggested the words, actions and approval of Prophet Muhammad and humane verses from the Quran be displayed with translations in mosques, congregation halls, monasteries and educational institutions, as well as be discussed on television programs.

The clerics also suggested the formation of a national commission composed of psychologists and experts in sociology, law and religion to make recommendations for the prevention of such incidents.

He said it was important to change the mindset of extremists and militants. “Our people are very easily incited. A mere accusation is enough to kill anyone,” he said.

For the past two years, we can’t even print or distribute the annual report of Ahmadi persecution in Pakistan

Pointing out that 23 Christians have been killed extrajudicially since 1992, Father Channan demanded speedy trials for the culprits who usually go unpunished. “The justice system must be improved,” he underlined.

Amir Mehmood, who handles communications for the minority Ahmadi sect, urged the state to do more than issue declarations.

“Posters against Shia, Ahmadis and other segments of society are a common sight on the streets and at crossroads. For the past two years, we can’t even print or distribute the annual report of Ahmadi persecution in Pakistan,” he told UCA News.

Mehmood said intolerance had deeply penetrated into Pakistani society. “Only the state can deal with parties indoctrinating hate slogans among young boys,” he said.

The Centre for Social Justice (CSJ) and the People’s Commission for Minorities Rights also emphasized the need for a national action plan to counter rising religious intolerance and extremism.

At least 85 persons have been killed extrajudicially since the promulgation of strict blasphemy laws by Pakistan’s former military ruler Zia-ul-Haq, who started a program of Islamization in the 1980s, the CSJ says.

The latest incident was reported on Feb. 13 when a mob carrying sticks and bricks attacked and injured a man suspected to have burned the pages of the Quran in Tandlianwala town of Punjab province. The victim was rescued by police and taken to an undisclosed location.