Neha Pervaiz, 15, was sexually assaulted, forcibly converted to Islam and married off to a 45-year-old Muslim 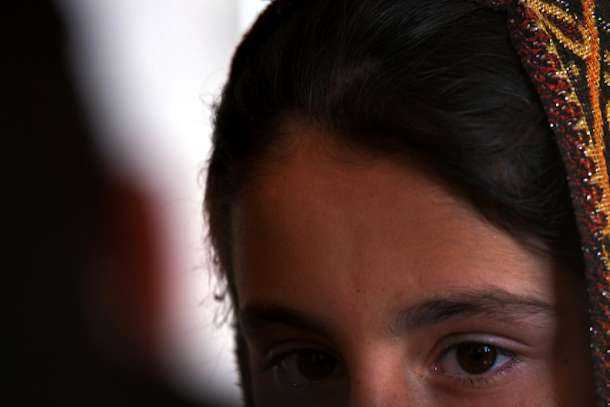 A 2013 file image of a young Pakistani girl who escaped a forced marriage in the Madyan valley of Swat in Pakistan’s northwest. (Photo: AFP)

A Pakistani court has ordered the arrest of an Islamist cleric accused of solemnizing the marriage of a minor Christian girl under pressure, coercion and influence in the southern city of Karachi.

Neha Pervaiz, 15, was sexually assaulted, forcibly converted to Islam and then married off to a 45-year-old Muslim man last year.

She filed a case against her purported husband Muhammad Imran, cleric Qazi Mufti Ahmed Jaan Raheemi and four others for her abduction, rape and forced marriage.

Mufti Raheemi, who was declared an absconder by the court, is also behind the conversion and marriage of Arzoo Raja, another Christian child victim.

During a Nov. 10 hearing, the court issued a non-bailable arrest warrant for the cleric and directed police to produce him on Nov. 16.

In her statement before the judicial magistrate, Neha Pervaiz denied having embraced Islam.

In an interview with UCA News last year, she shared her ordeal.

“I was taken by my aunt, a Muslim convert, to her house on April 28 to help her look after her sick son. But there I was asked to marry a Muslim man named Imran. When I refused, they beat me up and threatened to kill my minor brother who was with me,” Neha said.

“Later I was taken to a room where I was raped by Imran. They then pressurized me to convert to Islam and marry Imran. On April 29, I was taken to an Islamic cleric, who asked me to recite Quranic verses and gave me a new name, Fatima.”

She was later forced to marry Imran in a court on April 30.

On May 5 last year, Neha managed to escape with the help of Imran's daughter.

Jamila Masih, mother of Neha, said her daughter had returned home barefoot and was very scared.

“I was shocked to learn what had happened to my daughter as I was under the impression that she was at her aunt’s house to help her,” she said.

According to Neha’s family, police were initially reluctant to register their complaint, but they were able to lodge a case on May 13 with the help of others including Pastor Ghazala Shafique of the Church of Pakistan.

The development comes as the issue of forced conversion and marriage of underage Christian and Hindu girls is under the media spotlight due to the Arzoo Raja case.

In a statement, Catholic bishops voiced alarm over the sharp increase in cases of forced conversions.

“It is unfortunate that religious intolerance in Pakistan is sharply rising. Forced conversion has become a major tool for the persecution of Christians and Hindus in Pakistan,” the bishops said in a Nov. 7 statement.

He demanded that the government ensure that justice is served in the case of Arzoo Raja and that such incidents stop. “It is the responsibility of the state to legislate to protect its citizens, especially minor girls,” he said.

Father Emmanuel Yousaf, national director of the NCJP, said “the ugly reality of forced conversions is that they are not seen as a crime, much less as a problem that should concern the majority in Pakistan.”

He added: “We cannot allow our children and girls to be taken away from us, forcibly converted and married. A bill against forced conversions was introduced back in 2016 in the Sindh Provincial Assembly which has not been passed yet. The government must work to safeguard the rights of religious minorities in Pakistan as enshrined in our constitution.”