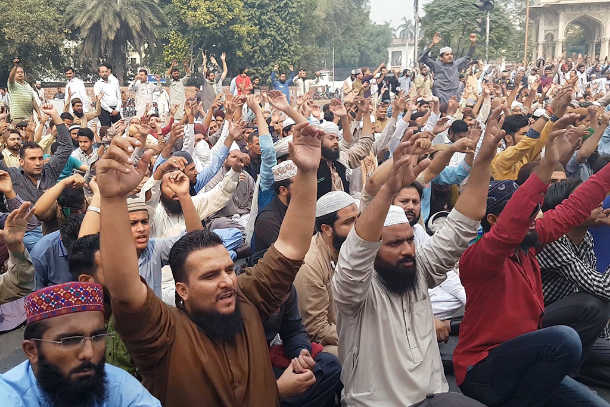 Tehreek-e-Labaik Pakistan activists protest in front of the Punjab Assembly in Lahore on Oct. 31 after Catholic woman Asia Bibi was cleared of blasphemy. (Photo by Kamran Chaudhry)

Security has been beefed up at churches across Pakistan following the release of Catholic woman Asia Bibi in a high-profile blasphemy case.

Mobile phone and internet services were suspended as protests erupted in various cities after the Supreme Court ordered the release of Bibi on Oct. 31.

The mother of five spent eight years on death row after being sentenced to death in 2010 on charges of insulting the Prophet Muhammad.

Bibi was arrested in 2009 when she was working in a field in a Punjab village and was asked to fetch water. A row later erupted after two female Muslim laborers refused to share the water with Bibi, citing religious differences. The argument escalated as insults were traded, with the women later accusing Bibi of committing blasphemy.

Her case hit the headlines when former Punjab governor Salman Taseer and minorities minister Shahbaz Bhatti were assassinated in 2011 for supporting Bibi and demanding reforms to the controversial blasphemy laws.

Several Pakistani priests are now paying tribute to the late Muslim governor on social media and posting his photos on their personal Facebook pages. Ucanews.com contacted several church officials in Lahore Archdiocese but all refused to comment.

Hundreds of supporters of hard-line Sunni group Tehreek-e-Labaik Pakistan (TLP) are occupying an intersection near the Punjab Assembly in Lahore. Baton-wielding activists have set up security checkpoints.

In his Oct. 31 address to followers, TLP chief Khadim Rizvi called for the death of the three judges who overturned Bibi's death sentence.

"This date will never be forgotten; we used to walk with our heads up in pride. This is a big revenge. We shall not tolerate this. Come out of your houses. It is time to be beheaded to defend the sanctity of Prophet Muhammad. Our protest will not end," Rizvi said.

"Damn the agencies who stood with Asia — you have lost your conscience for salaries. Either leave kalma [the Islamic proclamation of faith] or be loyal to Islam."

Caritas Pakistan appealed for prayers of peace in the country. The Catholic charity also allowed staff to leave work early.

"The acquittal has drawn a mixed reaction from Christian social media users. Most of them are happy with the decision but a sense of insecurity and fear is there due to the protesters, who may attack Christian localities and institutions," Caritas Pakistan stated.

"Rangers have been deployed in Youhanabad, the largest Christians locality in Lahore. Caritas Pakistan is vigilant and monitoring the situation and praying for the safety of Christians during this critical turmoil in the country."

Kashif Nawab, administrator of Minorities Rights Watch, said the verdict had improved the image of Pakistan.

"The reaction in Christian homes is obvious; it's an early Christmas. Thanks to international pressure, the authorities gave a positive message. However, we are also concerned at the challenges that lie ahead.  Anything can be expected from fanatics," the Christian activist told ucanews.com.

"We are grateful to the government and the Pakistan army for the security measures taken for the safety of churches, schools and other institutes belonging to religious minorities," said director Katherine Sapna.

Since 1990, 62 people have been extrajudicially killed following blasphemy allegations. Church and human rights groups have long claimed that the legislation has been used to persecute religious minorities and settle personal scores.