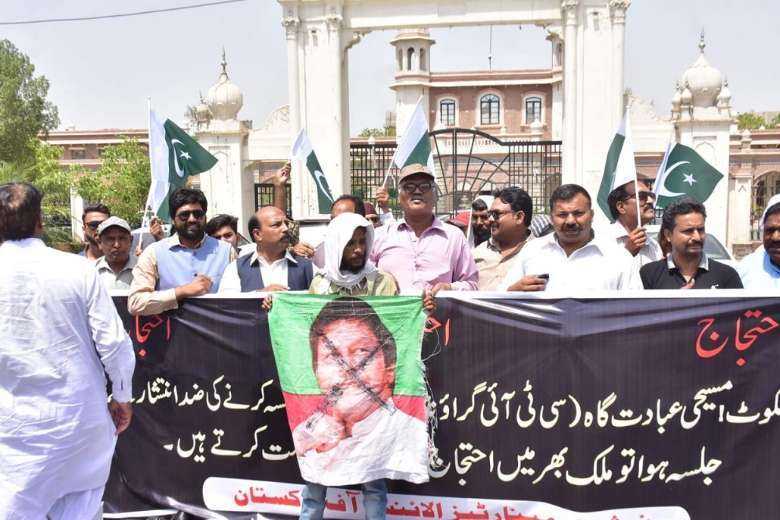 The National Minorities Alliance holds a protest against the PTI for forcefully organizing a political rally at the Christian Training Institute ground in Sialkot, Punjab province, May 14. (Photo: Kamran Chaudhry)

The Presbyterian Church of Pakistan thwarted an attempt to have a political gathering of the former Prime Minister Imran Khan at its ground in Sialkot, Punjab province, this weekend.

Lahore High Court last Friday directed the deputy commissioner of Sialkot to decide an application of the Presbyterian Board of Education against the use of its ground by Khan’s Pakistan Tehreek-e-Insaf (PTI) for its May 14 public meeting without permission.

The management of the Presbyterian Church of Pakistan had filed a writ petition in the High Court contending that the board had no information from the government or the party nor had it permitted anyone to hold political rallies at the Christian Training Institute (CTI) ground.

In 1881, the United Presbyterian Church of North America founded the CTI in Sialkot. Its playground has been a venue for the annual religious convention for the past 118 years.

If the PTI was not barred, other parties would also hold political rallies on the ground, which would affect the privacy of the minority education board, said Samson Jacob, a representative of the Presbyterian Education Board of Sialkot in the petition.

Khan, who led the nuclear-armed South Asian country for three and a half years, is leading nationwide rallies accusing Washington of backing a conspiracy to remove him.

In a video released this Friday, Usman Dar, former Special Assistant to the Prime Minister on Youth Affairs, targeted the Presbyterian American Society.

Christian leaders condemned his statement. The National Minorities Alliance held a protest against the PTI at District Council Chowk (crossroads) in Faisalabad carrying a photo with an X mark on the face of former PM Imran Khan.

“They are trying to occupy it by declaring it a public ground. It is the responsibility of the state to protect the holy places of minorities. It is terrorism to organize the rally despite the refusal of the Church administration,” said Lala Robin Daniel, chairman of the alliance.

“We have a religious affiliation with this ground. PTI tried to desecrate it and disappointed the Christian community. We condemn the attempt to forcefully hold a political activity here. We won’t allow it,” said Senator Kamran Michael in a video statement.

Punjab chief minister Hamza Shahbaz also asked PTI to change the venue of its public gathering in Sialkot referring to the reservations of the Christian community.

Dar and several other PTI workers were arrested during a police crackdown at the CTI ground. They were later released on bail and the venue was changed.

The Protection of the Communal Properties of Minorities Ordinance 2001 provides for a ban on the sale or transfer of minority communities' properties including side buildings, vacant places, lands, residential places, or offices annexed to said properties.

According to Christian advocate Riffat Bashir, the Church should avoid being involved in political controversies.

“The prejudiced people will vent their hatred under the guise of this incident. The people there are very bigoted. The Priyantha Kumara case is not very old. Everyone was concerned about preserving faith and religion, and no one cared about the residents or the Christian community,” she told UCA News.

“It was not a religious issue. The ruling party used the Christian community as a scapegoat. The CTI ground was already a popular venue for marriages and cricket matches. Hunger for cheap publicity will burn another town.”

This December, Sri Lankan factory manager Priyantha Kumara was beaten to death and set on fire by an angry mob in Sialkot over blasphemy allegations.

ADV RIFFAT BASHIR
Thank you so much to air my views. Religion is everyone's personal matter but we should take care of humanity first. Safety & Security of People is top priority. Thanks
Reply