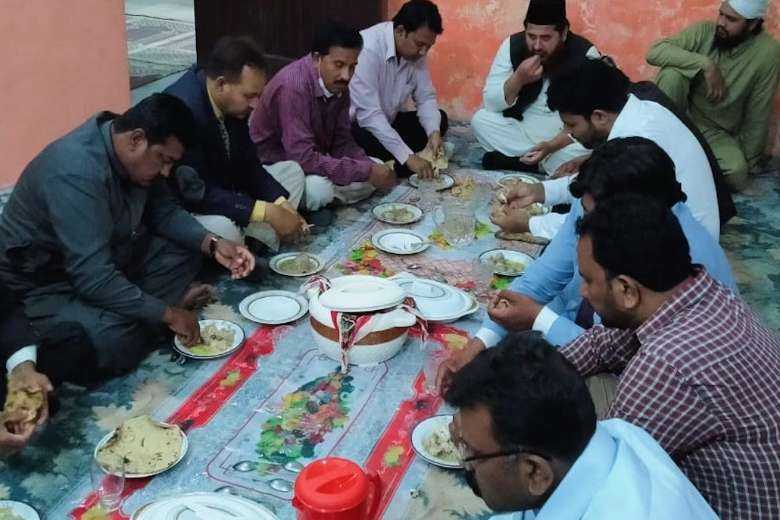 Part of a classic trend in the Lent season, interfaith groups are hosting breaking-of-the-fast Iftar dinners in the Islamic Republic of Pakistan.

Ashiknaz Khokhar, the Catholic leader of Active Youth group of the Sacred Heart Church, attended two such gatherings in Sahiwal in Punjab province.

“Such initiatives were common in provincial capitals. Now interfaith Iftars are being organized in small districts. They have increased love and respect for the local Muslims,” he told UCA News.

Khokhar was speaking on the sidelines of a buffet on Palm Sunday eve hosted by Muttahida Aalmi (United World) Ulema Council at a local hotel. Muhammad Naeem Mustafa Chishti, senior leader of the council, recited Quranic verses after welcoming guests including young Catholics and Presbyterian leaders.

A Dominican priest read from the Bible and referred to the first papal visit of Pope Francis to Iraq earlier this month.

“We are united for religious freedom of the minorities in the country. We assure you of complete cooperation in any legal case to ensure peace and brotherhood in our city,” Chishti told the gathering of 20 including eight clerics.

Khokhar, who also attended dinner on March 25 at a local madrasa (Muslim religious school), is planning to host a similar party during Islam's holy month of Ramadan in April. Table friendships also help battle against prevalent prejudices, he said.

Pakistani Christians working in Muslim offices often complain of separate glasses. In 2010, high-profile blasphemy victim Asia Bibi was sentenced to death on insubstantial evidence after being accused of insulting Prophet Muhammad in a dispute over a cup of water with a Muslim co-worker on a farm. The mother of five was acquitted after spending eight years on death row in Pakistan.

Local Christians are often referred to as churha (low caste), a racial and abusive term reserved for Christian sanitation workers. Church leaders label the taboo of untouchability as one of the major issues being faced by Pakistani non-Muslims.

However, activists like Khokhar brand Lent and Ramadan as game changers. Despite being an Islamic practice, Iftar is one of the most eagerly awaited occasions among both Muslims and Christians during their annual fasting. Several Christian families are distributing Iftar meals among the poor parishioners in churches to avoid social gatherings in their houses amid the pandemic.

These include Rina Sardar, a former mission partner of Good Shepherd nuns, who used to host Iftar parties for her community in the Sultanpura area of Lahore before her marriage in 2020.

“My father was alive when he started the practice in 2009. My siblings used to share their tithe for the funds. We used to invite people early morning for the evening gathering. Our catechist used to bless the fruits and meals. It was also a help for the poor and a chance to meet all during Lent. I hope to continue this with the consent of my husband,” she said.

“It is similar to Khatam e Quran, reciting the whole Quran. I prefer the term completion because nothing can finish the Bible. We can learn good things from any faith,” he said during liturgy at the Caritas Pakistan National Secretariat in Lahore last month.

“The goal can be achieved by reading the Bible for an hour a day except on Sundays. That’s how I completed the New Testament 38 times during the Lent season.

“Iftar is another good idea we can adopt from our siblings. Christians with resources should definitely host such dinners.”

“We share some common points with Muslims like charity and fasting and there is nothing wrong in it. However, such dinners can’t be generalized for the whole community. We experience a different spirituality and paschal mystery. Our traditions are much older,” he said.