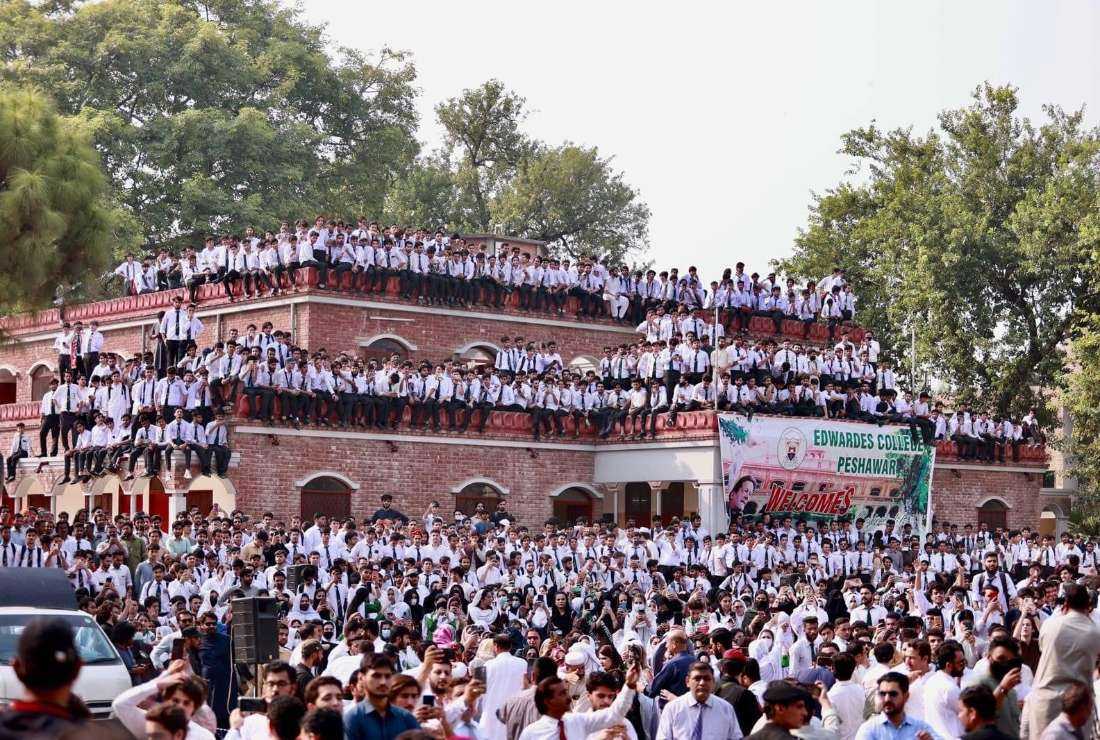 Students attend a rally at Christian-run Edwardes College in Peshawar of Pakistan organized by the party of former Prime Minister Imran Khan on Sept. 30. (Photo: PTI)

Christian leaders have criticized Pakistani politicians for using Christian institutions as campaign platforms, saying it could lead to politicizing of the tiny Christian community in the country.

In the latest incident of using a Christian institution, former Prime Minister Imran Khan’s party held a political rally on Sept. 30 at Edwardes College of Peshawar, the oldest Christian college in the Khyber Pakhtunkhwa province.

There have been allegations that the provincial government, run by Khan’s Pakistan Tehreek-e-Insaf (PTI) party, pressured the college authorities to host Khan’s gathering.

The college is managed by the Peshawar Diocese of the Anglican Church of Pakistan. The college, which houses a chapel and mission house, is in the province bordering Afghanistan.

Khan, ousted by a vote of no confidence in the parliament in April, urged hundreds of students at the Edwardes College to resist the “imported and corrupt government run by thieves.”

The college has become a center of controversy as the leaders from PTI’s rival Awami National Party have announced another rally on Oct. 4.

“Our institutions shouldn’t be involved in politics. They must only disseminate knowledge, research, culture, and education. They are not meant for state activities or mischiefs of politicians. That’s why we do not allow student unions,” Bishop Marshall told UCA News.

“We are non-political and condemn using our churches for personal agenda. We advocate promoting love, humanity, and the common good,” he said.

Acts and speeches deemed political were banned in church buildings throughout Lahore archdiocese in 2017 after Maryam Nawaz, daughter of former Prime Minister Nawaz Sharif, made a controversial speech inside the Sacred Heart Cathedral of Lahore.

The gathering and speech sparked a strong backlash from the Catholic community.

This May, the Presbyterian Board of Education thwarted a similar attempt to have a political gathering of Khan at the Christian Training Institute ground in Sialkot, Punjab province.

“As per Bible, we remain submissive to the governing authorities and welcome them as chief guests. The political turmoil has evolved to a war-like situation in the country and our only option is to stay neutral,” said Majeed Abel, moderator of the Presbyterian Church of Pakistan.

“Regardless of our individual preferences, Church institutions should avoid being stamped with one political party. Siding for one party will bring suffering to Churches. Sadly, the Christian parliamentarians of PTI are supporting Khan’s campaign and exploring venues ignoring their religious sensitivities.”

More than 90 percent of Pakistan’s estimated 220 million population are Muslims. Christians make up about 1.27 percent or some 2.8 million, with Catholics estimated to be forming half of it.