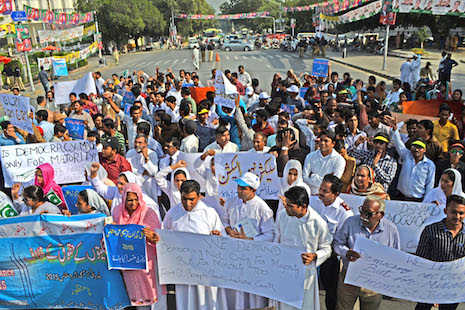 Christians demonstrate in front of the Punjab assembly in Lahore on Oct. 7. They are demanding the withdrawal of what they say is an anti-minorities bill. (Photo by Kamran Chaudhry)

Church leaders in Pakistan mobilized more than 1,000 Christians in front of the Punjab assembly to demand the withdrawal of what they said is an anti-minorities bill that denies voting rights to women, religious minorities and workers in local elections.

During the Oct. 7 protest in Lahore, the protesters shouted "shame, shame," and “minorities' murderers" as Catholic and Protestant bishops on a mounted truck called on the government to withdraw an amendment to the Punjab local government bill.

Church leaders have for months been protesting the ruling party's proposed amendment to the electoral system that allows union council members to select two female members, a worker, a youth and a non-Muslim member without allowing people from these categories to elect their own representatives. Elections for local bodies are scheduled for Oct. 30.

"Do not take us hostage," said Archbishop Sebastian Shaw of Lahore in his address from atop the truck. "I address all assembly members: change your tactics. No more selection. This is neither a political nor a religious issue but a question of our identity as Pakistani citizens."

Bishop Samuel Azariah, moderator of the Church of Pakistan, urged the government not to stop religious minorities from using their right to vote. "As long as the minorities continue to suffer, there will be no progress or peace in the country. How can you run a country if you can't protect the weaker minorities,” he said.

The protest followed a press conference held two days earlier, where Archbishop Shaw and Presbyterian, Salvation Army and Church of Pakistan officials jointly criticized the bill. The Lahore Archdiocese's vicar general and the Church Press Information secretary also had circulated a press release against the bill that was read in Catholic churches during Sunday Mass.

Amarnath Randhawa, president of the Hindu Sudhar Sabha (Hindu welfare society) told ucanews.com that "a political leader has no influence without street power" and that a selected official "cannot do anything" except to "become a puppet in the hand of their party."

Church leaders on Oct. 7 met with Mohammed Iqbal, Punjab legislative assembly speaker, and with Rana Sanaullah, the law minister, to present their reservations soon after the protest. Archbishop Shaw, retired Church of Pakistan Bishop Munawar Rumal Shaw of Peshawar, Col. Washington Daniel, chief secretary of Salvation Army Pakistan, along with three priests and two ministers were part of that delegation.

"The church leadership stood firm on their standpoint and demanded the withdrawal of the bill. They threatened to continue the protest in Punjab and all over the country if it was not withdrawn," said Samson Salamat, an organizer of a church press conference soon after.

"It seems our cries have finally reached them. Now we are asked to draft our concerns and hand it over to the government," said Salamat, who is also director of the Center for Human Rights Education and who had filed a petition against the Punjab local government bill. "Even after the passage of the ordinance, we are hopeful to strike down it," he said.

Earlier, the Supreme Court ruled that non-Muslim representatives allotted for reserved seats at the national level should be selected through secret ballots conducted among minority groups themselves.