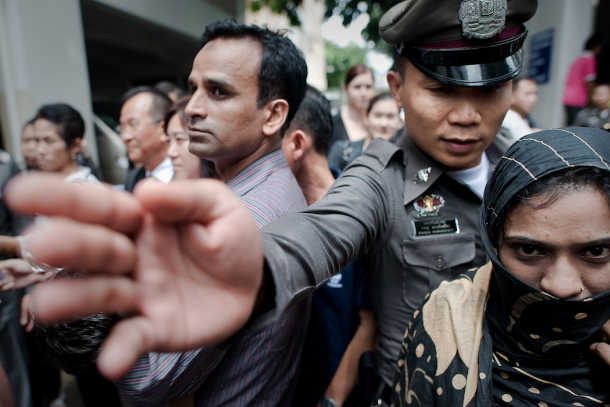 A file image of a Thai immigration police officer directs Pakistani refugees released on bail to a waiting bus after their detention at the Immigration detention center in Bangkok on June 6, 2011. (Photo by Nicolas Asfouri/AFP)

A renewed crackdown by Thai immigration authorities on visa over-stayers has worsened the already dire situation for thousands of refugees and asylum seekers in Bangkok, sources have told ucanews.com.

Last week dozens of foreigners staying or working illegally in the Thai capital were rounded up after Police Maj. Gen. Surachet Hakpan, the acting chief of Thailand's Immigration Bureau, promised a tougher stance on visa over-stayers.

Among the 59 people arrested one day alone were six stateless people who, Thai authorities said, stayed in Bangkok without permits.

Also detained in recent days have been several Pakistani Christians seeking asylum in Thailand as members of a persecuted religious minority.

They included a four-member family of Christians from Pakistan, who fled their home in fear of their lives owing to religious persecution in an increasingly conservative Muslim-majority nation. They were arrested in the modest apartment they had been renting in the Thai capital, according to other Pakistani Christian asylum seekers.

The family was taken to Bangkok's Immigration Detention Center, where hundreds of men, women and children languish in overcrowded and squalid conditions for weeks, months and even years.

Thai authorities routinely view refugees and asylum seekers as no different from illegal economic migrants and accord them no special treatment or privileges.

"The renewed crackdown and lack of compassion towards asylum seekers by the Immigration Bureau is particularly disheartening given that it comes at a time when there are stories in the Thai press almost every day on greed and corruption among senior officers at the bureau," a foreign refugee advocate from a Bangkok-based Catholic organization, who asked to remain anonymous, told ucanews.com.

The intensifying crackdown has unnerved the thousands of Pakistani Christian asylum seekers who live in Bangkok while they await a chance to be resettled to a third country as refugees.

Many of these Christian asylum seekers, who came to Thailand on tourist visas, have been stuck in limbo in the country.

They are reluctant to return home for fear of being further victimized in Pakistan, where the persecution for Christians has intensified in recent years. Yet they have not been able to obtain refugee status from the United Nations, which would offer them protection from arrest and detention.

Most of the Pakistani Christians who have been staying illegally in Thailand, often for several years, spend their time hiding out in low-rent apartments, fearing a knock on the door from immigration authorities. They often subsist on financial handouts from local Catholic charities and organizations.

Some of them have found various forms of employment illegally. Yet at least some are considering quitting those jobs for fear that they might be stopped on their way to and from work by immigration officials, according to members of the community contacted by ucanews.com.

"I never feel safe when I leave my home, especially during times like this," said a Pakistani Christian asylum seeker who works part-time in a hotel.

Another concern, say asylum seekers who depend on working illegally to make ends meet, is that the clampdown may cause local businesses to be less willing to employ foreigners without valid visas and work permits.

According to Thai media reports, Immigration Bureau chief Surachet has instructed officials to keep a close eye on foreigners in their areas and arrest anyone who is found to be staying or working there illegally.

"Our situation was bad before, but it could be getting worse now," a Bangkok-based Pakistani Christian asylum seeker said.