The Church is doing its best in challenging times for Pakistan but support needs to be creative, sensitive and timely Pakistan is becoming a dangerous place for minorities, especially Christians. The recent incidents of Christian girls being abducted and forcefully converted to Islam have instilled fear among Christian communities in the South Asian country.

People belonging to minority communities are feeling increasingly unsafe as there is not much being done by the government to stop forced conversions.

Christian parents are now scared to send their children, especially girls, to study in institutions run by non-Christians. However, there are not enough Christian institutions to accommodate the suffering students and professionals.

A friend’s brother has been working in a non-Christian organization for more than 18 years but continues to face discrimination and hatred in the name of religion. He feels sick and exhausted and wants to work in a Christian institution.

Christians accused of blasphemy in legal cases find themselves in a worse situation. They are forced into hiding and lose their jobs, accommodation and reputations.

The Church needs to open shelter homes for the victims of Pakistan’s blasphemy law as they are rendered jobless and unsafe.

Most of Pakistan’s Christians are settled in villages and study in government schools where they face discrimination in the name of religion at a very early age. They are raised with feelings of low self-esteem.

The Church must restore or build new boarding houses to provide a safe environment for these young Christian students.

Pastoral counseling centers are urgently needed for people who face religious persecution and discrimination. The Church must have trained pastoral counselors to counsel victims regularly to protect them from serious emotional and psychological issues. 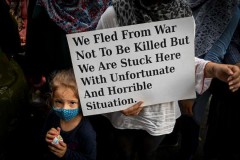 These are challenging times in Pakistan. The Church is doing its best but pastoral support needs to be creative, sensitive and timely. They need to think out of the box.

Pastoral and institutional support must not be limited to Christians or Catholics but must be expanded to non-Christians, especially the poor.

With the influx of Afghan refugees into Pakistan, the Church must open its doors to the poor and needy fleeing due to political instability in the region.

The victims of violence and discrimination not only need shelter but also compassionate care. They need words of comfort and support along with food and shelter.

In Isaiah 40, the Prophet Isaiah says: “Comfort, comfort my people.”

Now is the time for the Church to comfort the afflicted, displaced, troubled and depressed.

The Church must train the laity and clergy to extend support to the people. Volunteers who are ready to support the needy must really work under the guidance of the Holy Spirit; only then will their service bear fruit.

There is a difference between being dutiful and rendering compassionate service. Volunteers who are trained must be transformed and understand the true meaning and value of life. They must understand suffering and help the poor refugees and victims of the blasphemy law to find meaning in suffering.

Viktor Frankel found meaning in his suffering in the concentration camps during World War II. The volunteers must help the needy find meaning in life.

The volunteers must help victims to never lose hope. A human who is disgraced can lose hope but accepting and honoring the gift of life can help rediscover the true meaning in life.

Our role is to shine in the darkness. We have been created as the light of the world and must not hide this light

It’s very important to be thankful to God at all times. The spirit of thankfulness fills you with positive energy and helps you to move on.

The Church during these times seems to be slow-moving. We need to speed up things.

It’s high time for the Church to build a solid pastoral relationship with the government and local non-profit groups by working shoulder to shoulder for the uplift of the needy.

In John 7:37, Jesus says that “if any man thirsts let him come unto me and drink.”

During this turmoil, we must bring the water of life to quench the thirst of rejection, hatred, discrimination and displacement. The Church must see with the eye of compassion and hear with the ear of heart; only then can it be a true disciple of Christ.

Naeem Harry is a hospice chaplain in New Jersey in the United States. The views expressed in this article are those of the author and do not necessarily reflect the official editorial position of UCA News.