Activists call for immediate arrest of the two perpetrators 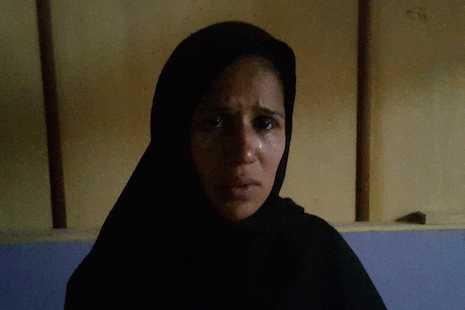 Elishba Bibi, 28, says she was beaten with a pipe, stripped naked and dragged into the street before falling unconscious (Photo by ucanews.com)

Christian activists in Pakistan on Thursday called for the immediate arrest of two Muslim brothers involved in stripping a pregnant Christian woman naked and beating her.

Elishba Bibi, 28, who was three-months pregnant, suffered a miscarriage after the beating by two brothers, Muneeb and Mobeel Gondal, who allegedly attacked her because she had argued with their mother and sister.

Bibi told police she was beaten with a pipe, stripped and dragged into the street before falling unconscious. She was rescued after Christian neighbors called police.

“The suspects also snatched my mobile phone, a gold necklace and 1,000 rupees [about US$10], that was my salary,” she said.

Aslam Pervaiz Sahotra, a rights activist and Chairman of Human Liberation Commission of Pakistan (HLCP) condemned the attack, saying it was motivated because of Bibi’s faith.

Sahotra also criticized police for failing to arrest the suspects after almost two weeks. He accused police of conducting a half-hearted investigation with the intention of exonerating the suspects.

On Wednesday, he and other Christian activists protested outside the Lahore Press Club to demanded swift and strong action against the suspects and the investigators.

Sahotra quoted Bibi as saying that the Muslim family often tried to persuade her to convert to Islam. He also said Christians who filed charges against the brothers were being threatened.

“We are now receiving reports that Christian families are being told to withdraw the case or face mob violence on false blasphemy charges,” he told ucanews.com

He said that the HLCP had told senior police officers in Sheikhupura about the threats.

The attack on Bibi comes just a few weeks after a Christian couple was brutally beaten and burned to death by a 1,500-strong mob at a brick-making kiln after being accused of burning pages of the Qur’an.